In technical terms, algae can refer to different types of aquatic photosynthetic organisms, both macroscopic multicellular organisms like seaweed and microscopic unicellular organisms like cyanobacteria[1]. However, algae (or algal) bloom commonly refers to the rapid growth of microscopic unicellular algae. Although unicellular algae are mostly innocuous and naturally found in bodies of water like oceans, lakes, and rivers, some algae types can produce hazardous toxins stimulated by environmental factors such as light, temperature, and increasing nutrient levels[2]. Since algal toxins can harm marine life and the ecosystem detrimentally, algal bloom threatens people and endangered species, especially considering wide-ranging water pollution.

A harmful algal bloom (HAB) occurs when toxin-secreting algae grow exponentially due to ample nutrients from fertilizers, industrial effluent, or sewage waste brought by runoff in the body of water. Most of the time, the excessive algae growth becomes discernible in several weeks and can be green, blue-green, red, or brown, depending on the type of algae. Therefore, an algae bloom can only be detected visually in several weeks if a prewarning system is not available. Even though there is a prewarning algae bloom system for the surface of a body of water, algal bloom can occur beneath the surface due to discharged industrial sediment and dregs.

Since there are no nascent visual signs, it is harder to detect deep algal bloom before being entrenched in the body of water. Until detecting deep algal bloom, potentially frequent and low-level exposures to HAB toxins can cause execrable effects on marine life and health risks for people. When deep algae bloom is left unattended, its excessive growth may block sunlight from reaching other organisms and cause oxygen insufficiency. Unfortunately, uncontrolled algae accumulation can lead to mass extinctions caused by eutrophication.

After scrutinizing recent research papers on deep algae bloom, I noticed there are very few appliances focusing on detecting deep algal bloom. Therefore, I decided to build a budget-friendly and easy-to-use prewarning system to predict potential deep algal bloom with object detection in the hope of preventing the hazardous effects on marine life and the ecosystem.

To detect deep algae bloom, I needed to collect data from the depth of water bodies in order to train my object detection model with notable validity. Therefore, I decided to utilize a borescope camera connected to my Raspberry Pi 4 to capture images of underwater algal bloom. Since Notecard provides cellular connectivity and a secure cloud service (Notehub.io) for storing or redirecting incoming information, I decided to employ Notecard with the Notecarrier Pi Hat to make the device able to collect data, run the object detection model outdoors, and inform the user of the detection results.

After completing my data set by taking pictures of existing deep algae bloom, I built my object detection model with Edge Impulse to predict potential algal bloom. I utilized Edge Impulse FOMO (Faster Objects, More Objects) algorithm to train my model, which is a novel machine learning algorithm that brings object detection to highly constrained devices. Since Edge Impulse is nearly compatible with all microcontrollers and development boards, I had not encountered any issues while uploading and running my model on Raspberry Pi.

After training and testing my object detection (FOMO) model, I deployed and uploaded the model on Raspberry Pi as a Linux (ARMv7) application (.eim). Therefore, the device is capable of detecting deep algal bloom by running the model independently without any additional procedures or latency.

Since I focused on building a full-fledged AIoT device detecting deep algal bloom and providing WhatsApp communication via cellular connectivity, I decided to develop a webhook from scratch to inform the user of the model detection results with the collected water quality data and obtain given commands regarding the captured model detection images via WhatsApp.

This complementing webhook utilizes Twilio's WhatsApp API to send the incoming information transferred by Notecard over Notehub.io to the verified phone and obtain the given commands from the verified phone regarding the model detection images saved on the server. Also, the webhook processes the model detection images transferred by Raspberry Pi simultaneously via HTTP POST requests.

Lastly, to make the device as robust and sturdy as possible while operating outdoors, I designed an ocean-themed case with a sliding front cover and separate supporting mounts for water quality sensors and the borescope camera (3D printable). 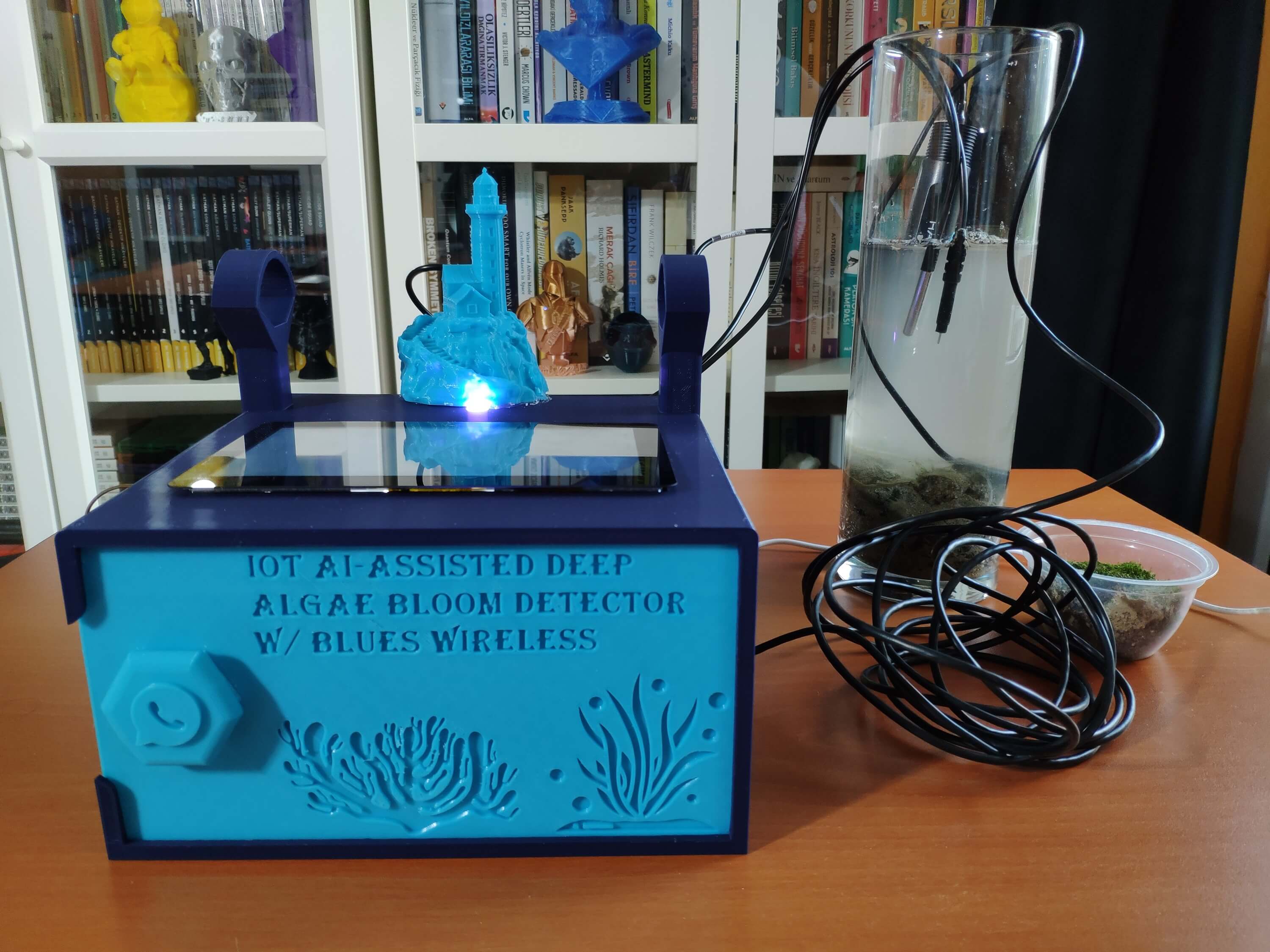 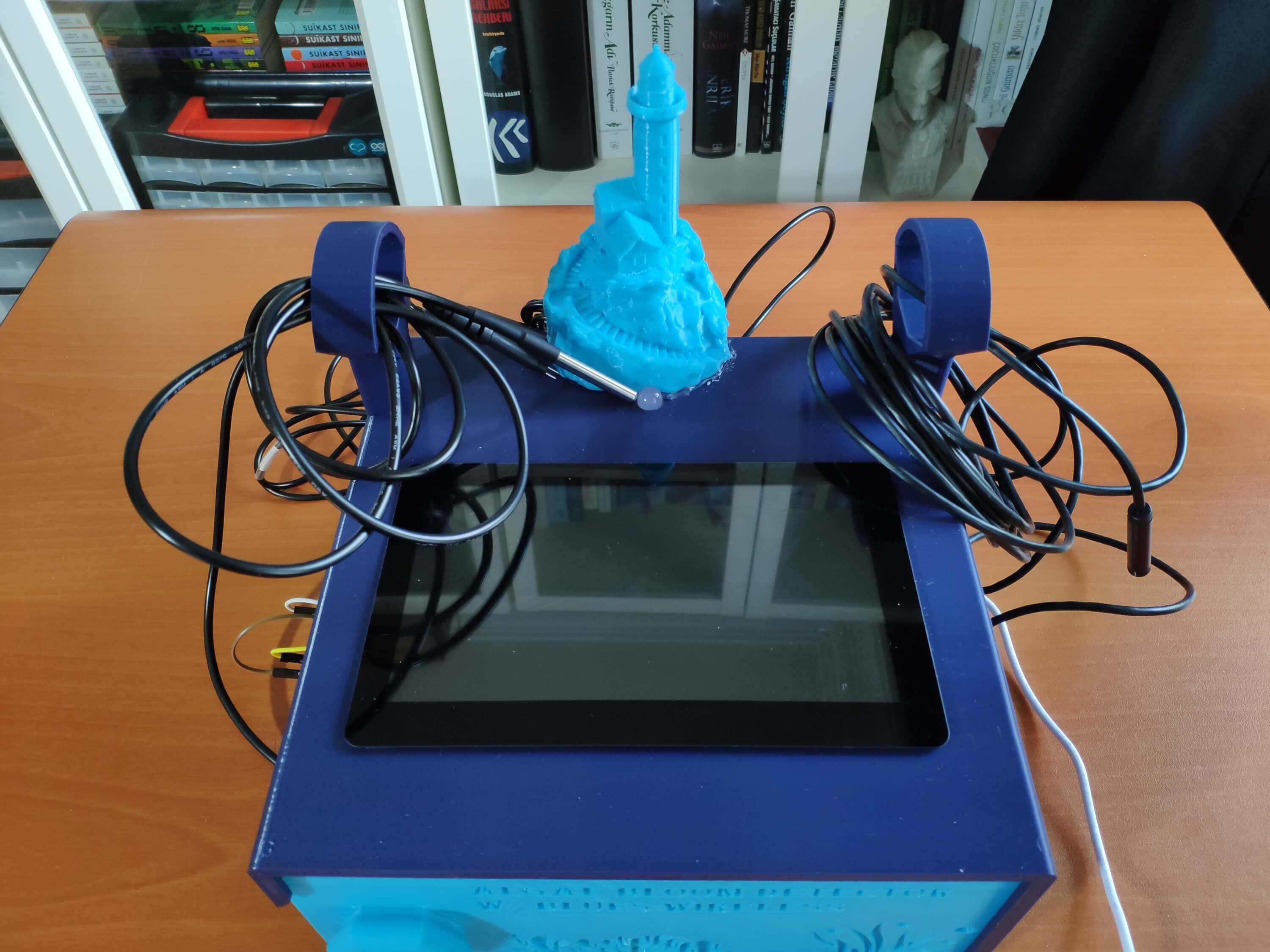 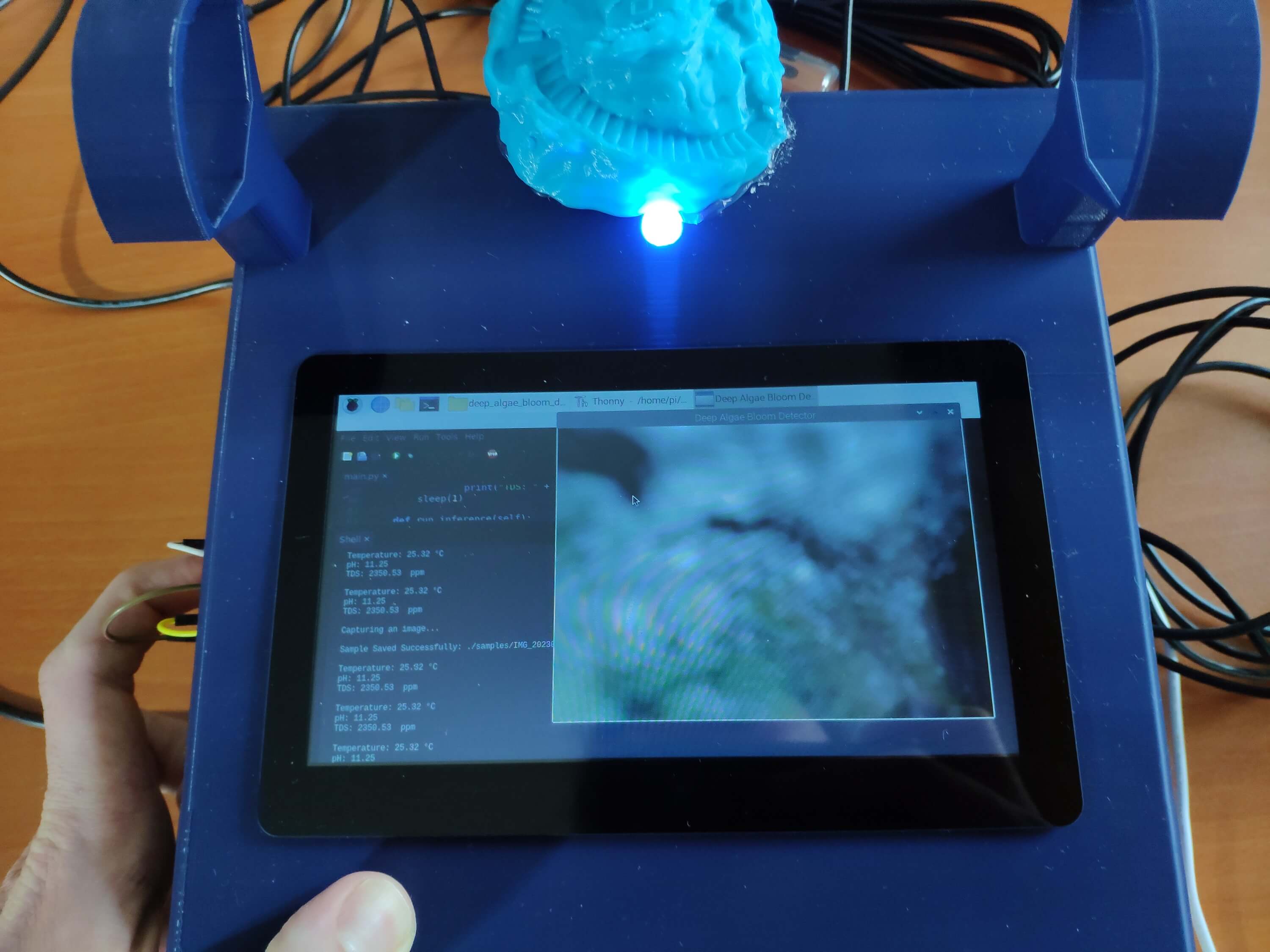 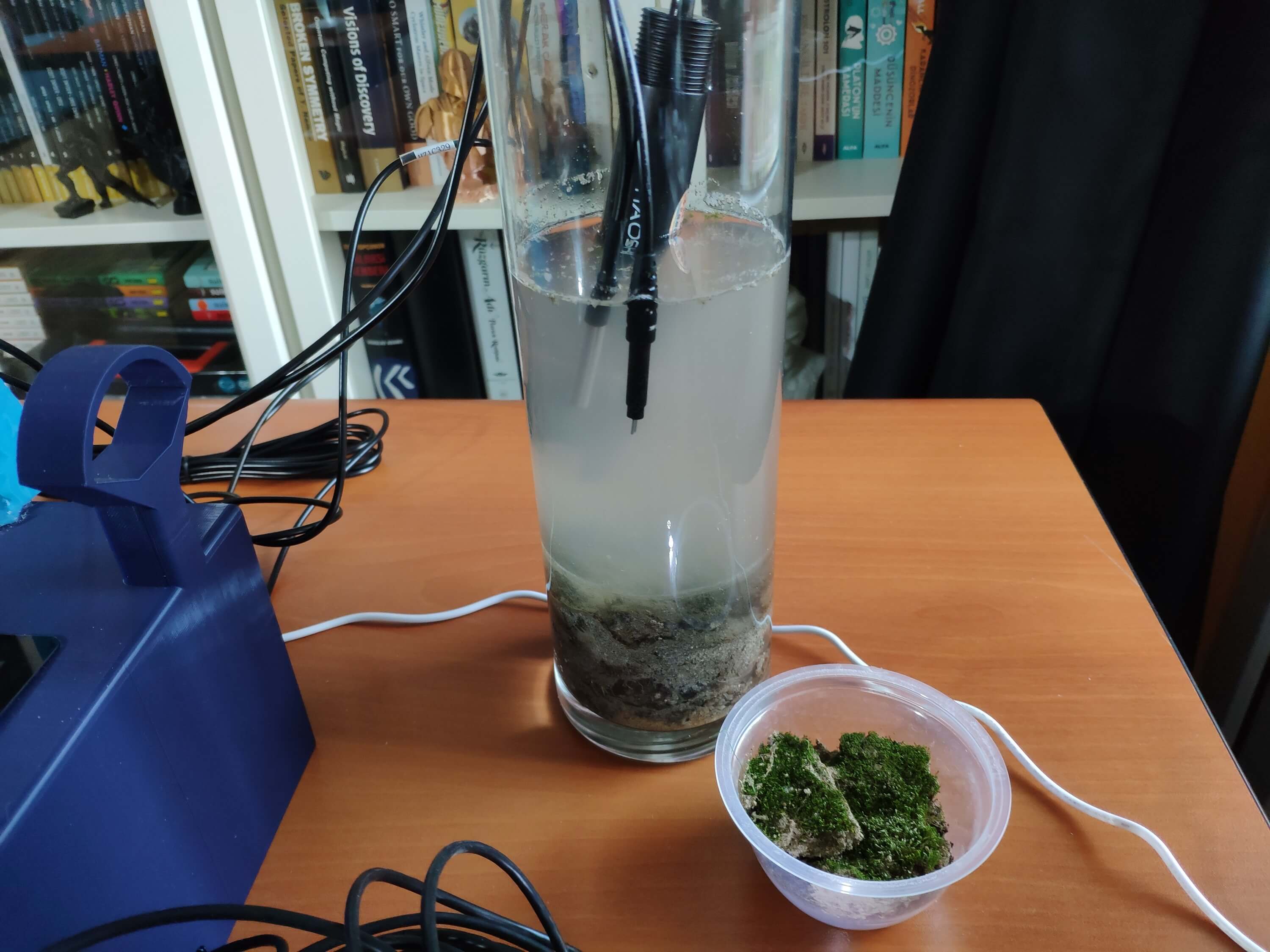 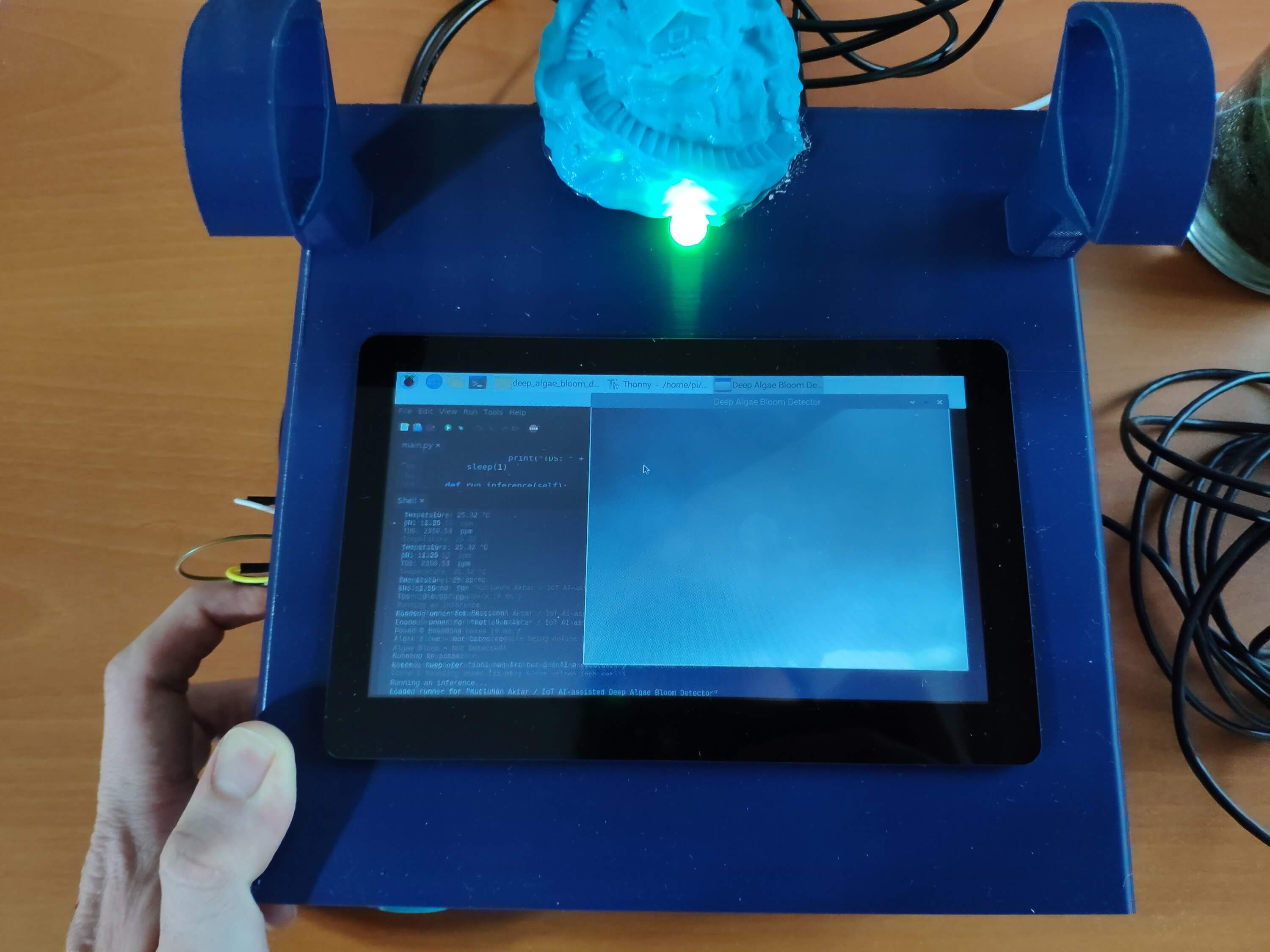 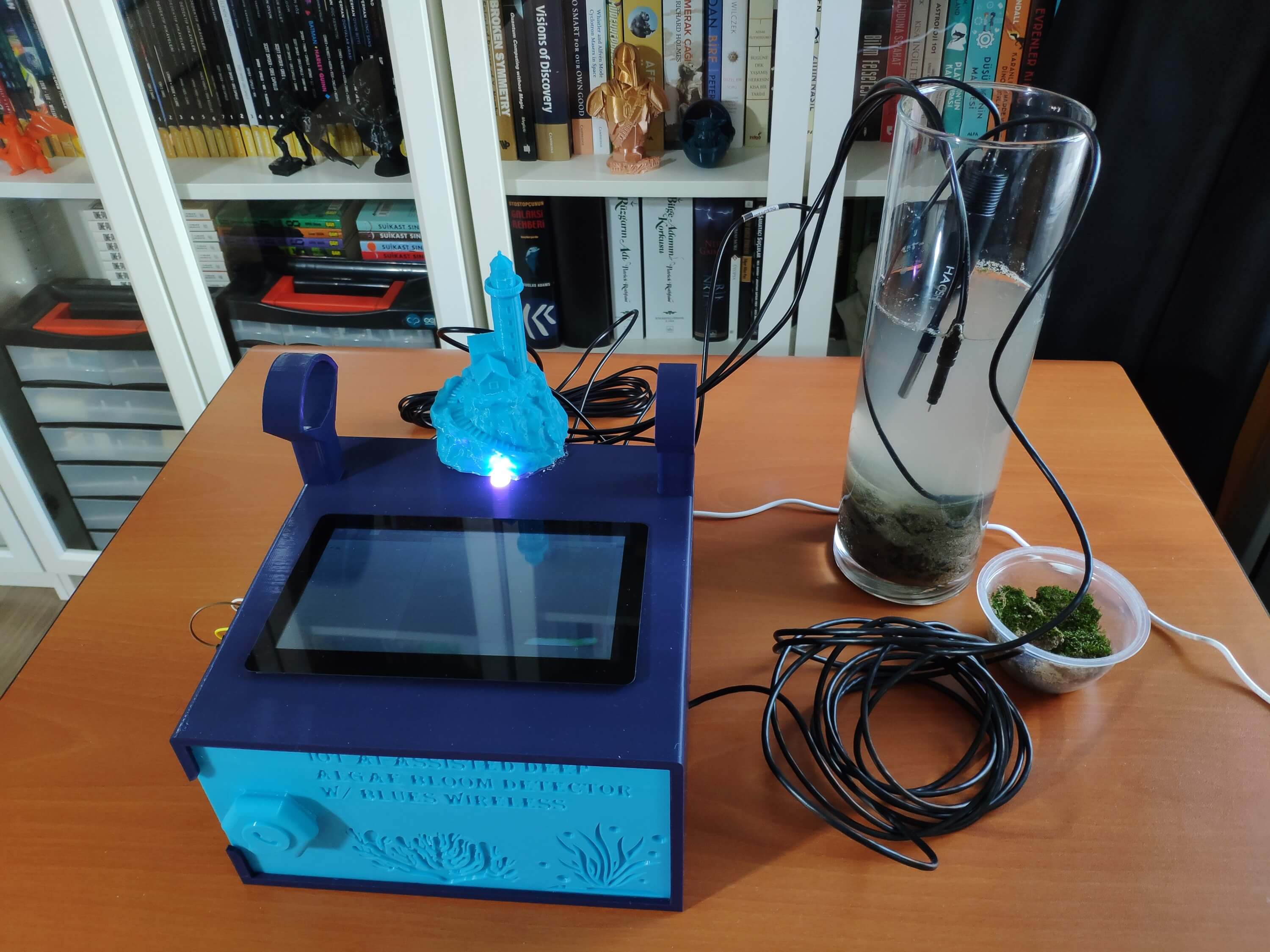 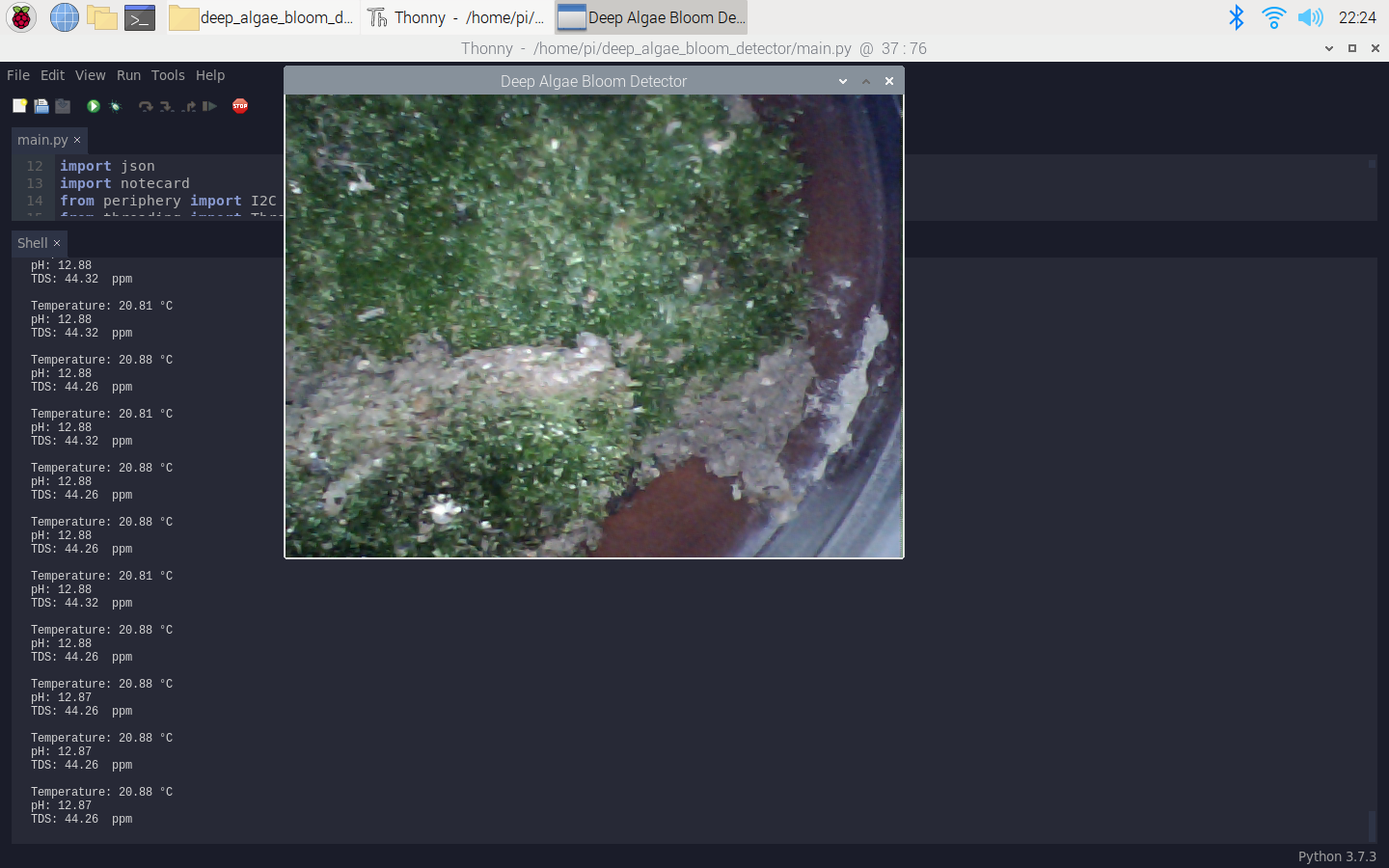 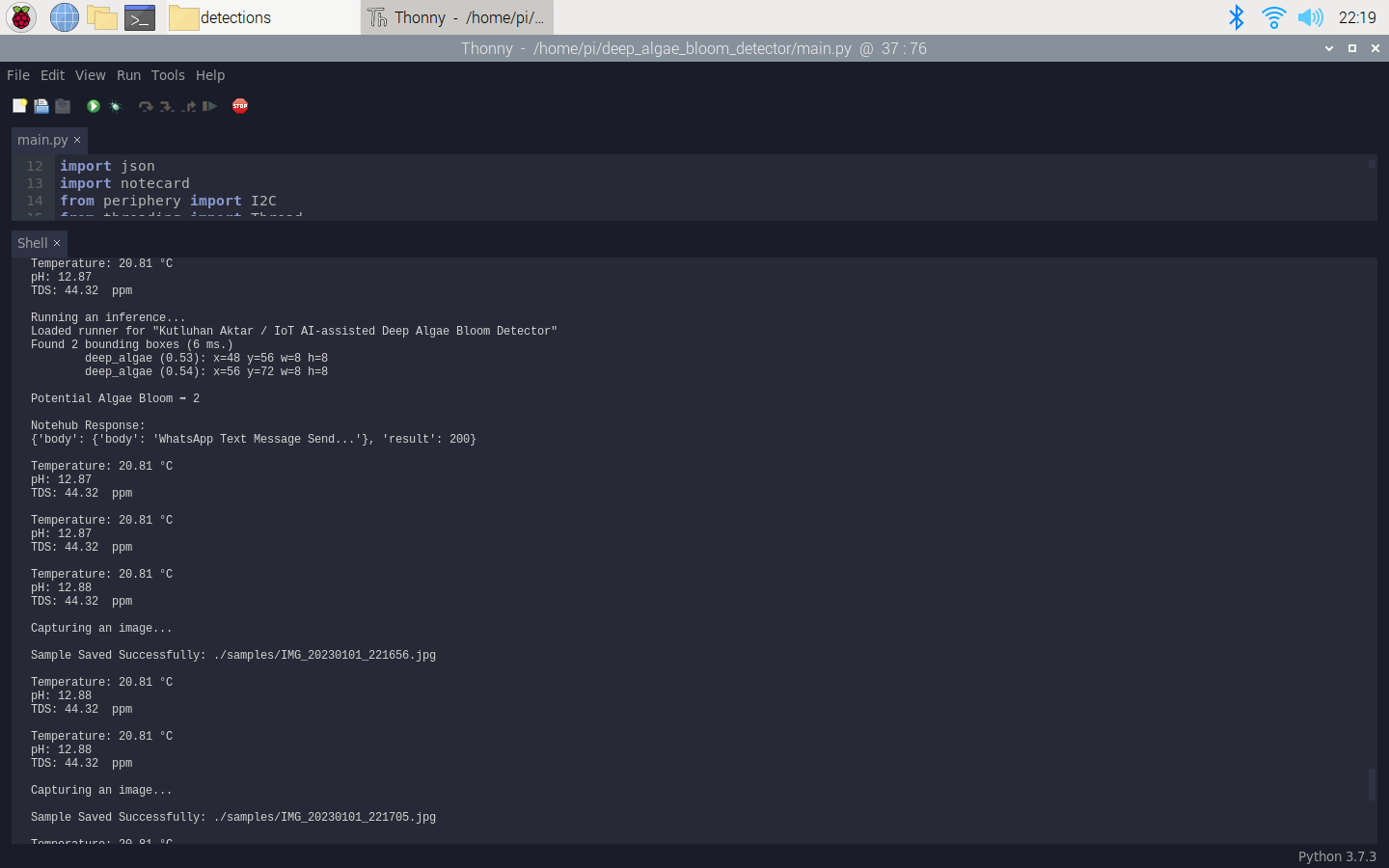