Soil analysis has become crucial within the past few years due to the relevance in food production, carbon storage, and the impact on plan growth. In fact, unveiling strategies to enhance soil health, and crop yield are a priority wfor farmers, due to the continuous soil degradation of fields. However, current methods for soil biological activity are expensive, and require complex and time-consuming technologies. In particular, the determination of soil nitrogen is key, due to its involvement in plant growth. Inorganic soil nitrogen is predominantly present as ammonia (NH4) and nitrate and it is absorbed by plant roots. As such, determining the concentration of volatile ammonia could provide information about soil health. The current standard for determining soil bioactivity is the determination of CO2. Although CO2 can provide information of bacterial activity, since it is generated by the metabolism of soil carbon, it provides limited information about nutrient availability.

In this project, we will test the performance of the Ammonia Sensor NH3 Sensor (Calibrated) for the determination of soil fertility using a simple configuration. This ammonia sensor can detect gases between 0-100 ppm, and can be easily integrated with a microcontroller for continuous sensing. In this case, an arduino Uno was employed, and the ammonia sensor was connected to a sealed bottle as shown below. NH3 will be measured to determine soil health, and the performance of this gas will be compared with CO2 measurements using an infrared CO2 sensor. A wide range of CO2 sensors can be found commercially, including the the SEN0220, or the SCD30. The latter will be used in this project for the testing of the environmental chamber. 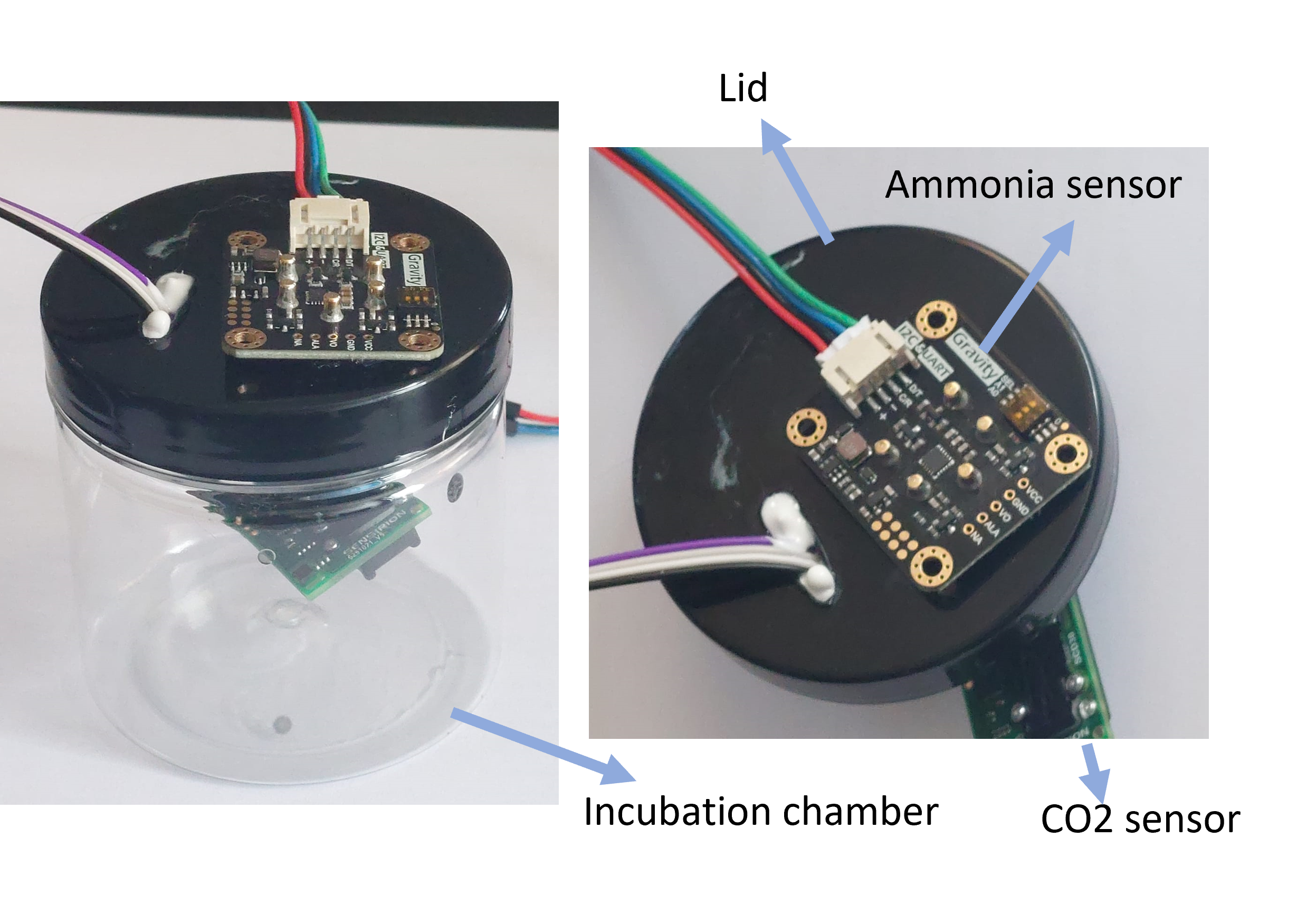 Initially, the sensors were tested with real soil samples. These samples contain a large variety of soil microbes and nutrients that continuously degrade organic matter. This organic matter contains a high concentration of carbon and nitrogen elements, which are metabolised in the form of NH3 and CO2. The two components are gaseous at standard environmental conditions, allowing their measurement by the sensors. As such, both CO2 and NH3 increase due to the biotic activity of soil.

To test the effectivity of the ammonia sensor in the measurement of soil health, the sensor, alongside a CO2 sensing device, was incorporated in a sealed bottle as shown before (a). The signal obtained when the bottle was empty was then recorded, and used as a control for the next experiments (b). After incorporating a natural soil sample inside the bottle, the ammonia signal increased from 0 to 5 ppm as expected. These measurements were taken after stabilisation of the signal for 15 mins, although longer times can be taken for a more accurate assessment of ammonia produced by the soil samples. The preliminary results indicated that produced ammonia by soil can be determined using this system.

The next step in the demonstration of the sensor response was the analysis of soil produced gases when subjected to different conditions. Multiple soil inputs, such as the direct use of sugars, have been demonstrated to increase microbial activity, since these bacteria can effectively metabolise them and reproduce. This is the reason why the use of standardised amounts of glucose are commonly used to assess the biological activity of soil samples. Moreover, the use of other agricultural inputs such as fertiliser have been proven to modify soil microbiome.

To test the suitability of the ammonia sensor in the assessment of the impact of these methods, we tested them in soil samples of similar weights. First, 1 g of sugar was diluted in 20 mL of water, and added to the soil sample. The increase in both ammonia and CO2 was then analysed. These measurements were compared to those obtained in the control soil sample, where no chemicals had been added. Ammonia concentrations almost doubled, from 5 ppm observed in the control sample, up to 9 ppm (a). Moreover, the measured concentration of CO2 drastically increased, up to 7900 ppm (b). However, contrary to the ammonia, the CO2 measurements had not been stabilised at the end of the 15 min incubation period, suggesting that higher concentrations could be obtained at longer incubation times.  However, it requires longer stabilisation times to reach a constant measurement. As such, both ammonia and CO2 measurements were sensitive to the incorporation of sugars to the soil. Although CO2 was proven to be more sensitive in this case, it also required a longer operation time, which could be a consequence of the lack of nitrogen atoms in sugar, which limits the production of ammonia.

After demonstrating the effects of sugar in the production of gases from soil, a commercial fertiliser was added to a sample with a similar weight. Fertiliser solutions typically contain multiple organic and inorganic components, with a significant concentration of nitrogen. As such, a higher increase in ammonia is expected in this case. The recommended amount of fertiliser was applied on the soil, and the concentration of both CO2 and ammonia was determined for 15 mins as shown in the previous case. The concentration of ammonia increased from 5 to 12 ppm, respect to the control sample where no fertiliser had been employed (c). On the contrary, CO2 concentrations increased up to 3000 ppm, leading to a lower increase than in the case of sugar use (d). As such, CO2 measurements were less sensitive towards the use of fertilisers on the soil, compared to the addition of sugar alone, while ammonia measurements showed the opposite trend, due to the presence of nitrogen components in common fertilisers. These differences in behaviour between both cases are key, since a combination of both measurements could potentially be used to identify soil health, or the potential need of nutrients, or nitrogenated components. As observed in the previous case, CO2 measurements had not been stabilised within the 15 mins of operation. 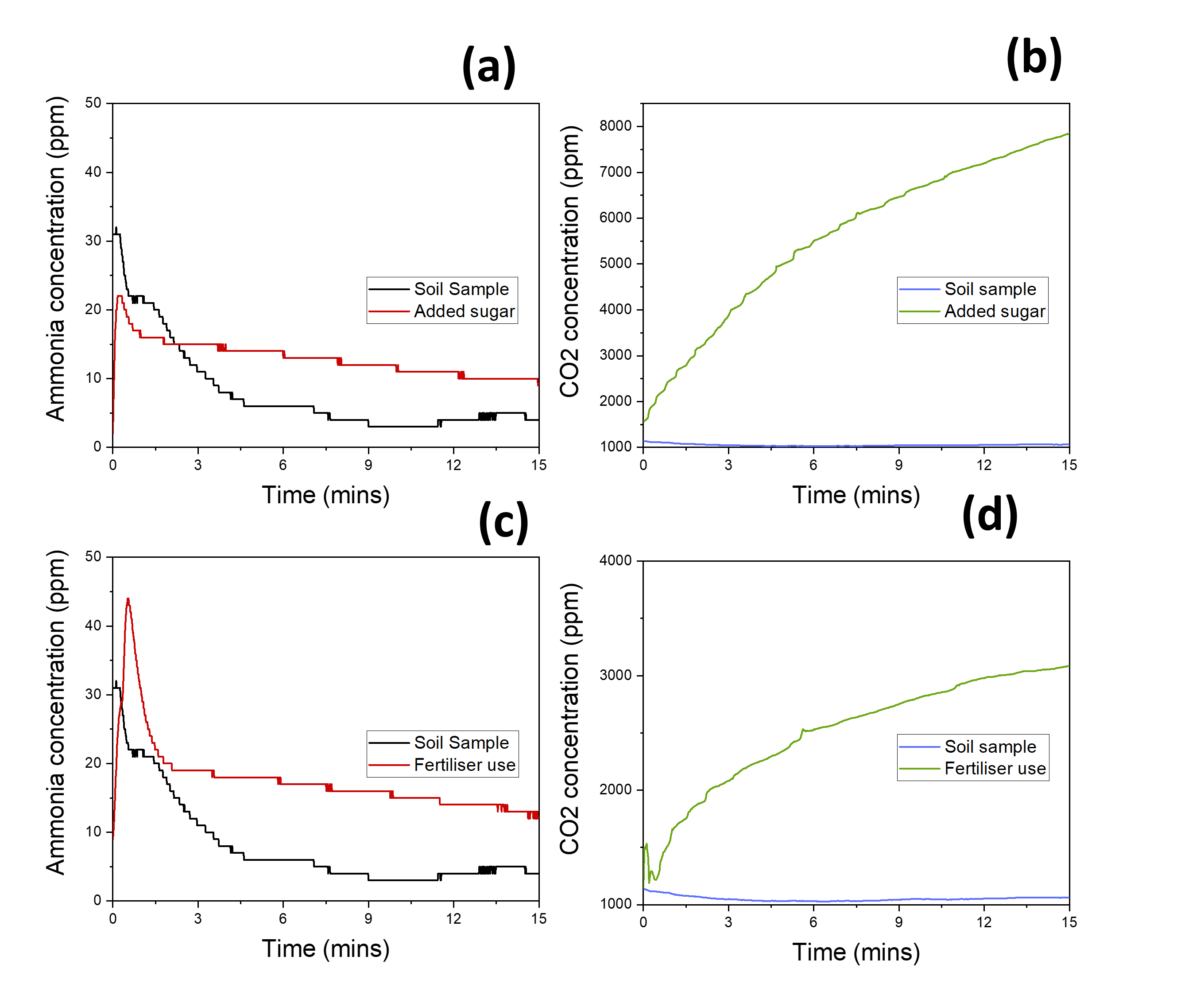 These results previously obtained evidence that both the incorporation of sugar and fertiliser have the potential to boost microbial activity in soil. However, in bot cases, only moderate amount of supplements were added to the soil sample. A common challenge within toady's farming technologies is the overuse of fertiliser, which can lead to soil degradation, and losses in crop production. As such, the soil sample was tested when fertiliser was used in the range of 100 times higher than the recommended concentration. In this case, a similar ammonia concentration was measured as in the case of the control, in the range of 5 ppm (a). On the contrary, the concentration of CO2 greatly increased compared to the one in the control sample, being in the range 16000 ppm compared to the 1080 ppm measured in the control sample, and 3000 in standard concentration of fertiliser (b). Such increase could be a consequence of the activity of bacteria, and the release of chemicals contained within the fertiliser. As such, these results indicate an effect on growth of bacteria due to the excessive concentration of fertiliser, which could impact on the germination and development of crops.

Separately, the effect of other physical inputs such as overheating was also tested. In this case, the soil sample was heated up to 200 C for 30 mins, and the concentration of gases was determined. These high temperatures reduced the population of bioactive components, which was reflected on a lower concentration of gases. Ammonia concentrations were negligible, as expected due to the abscence of living bacteria to degrade nitrogenated components (c). However, the concentration of CO2 was similar to the one measured in the case of control samples, in the range of 1200 ppm (d). This similar concentration could be a result of accumulated gas inside the soil samples, being released on a sustained way within the measurement time. More importantly, these results highlight the importance of determining ammonia to assess soil quality, having a more consistent and faster response than CO2 for establishing poor soil practises. 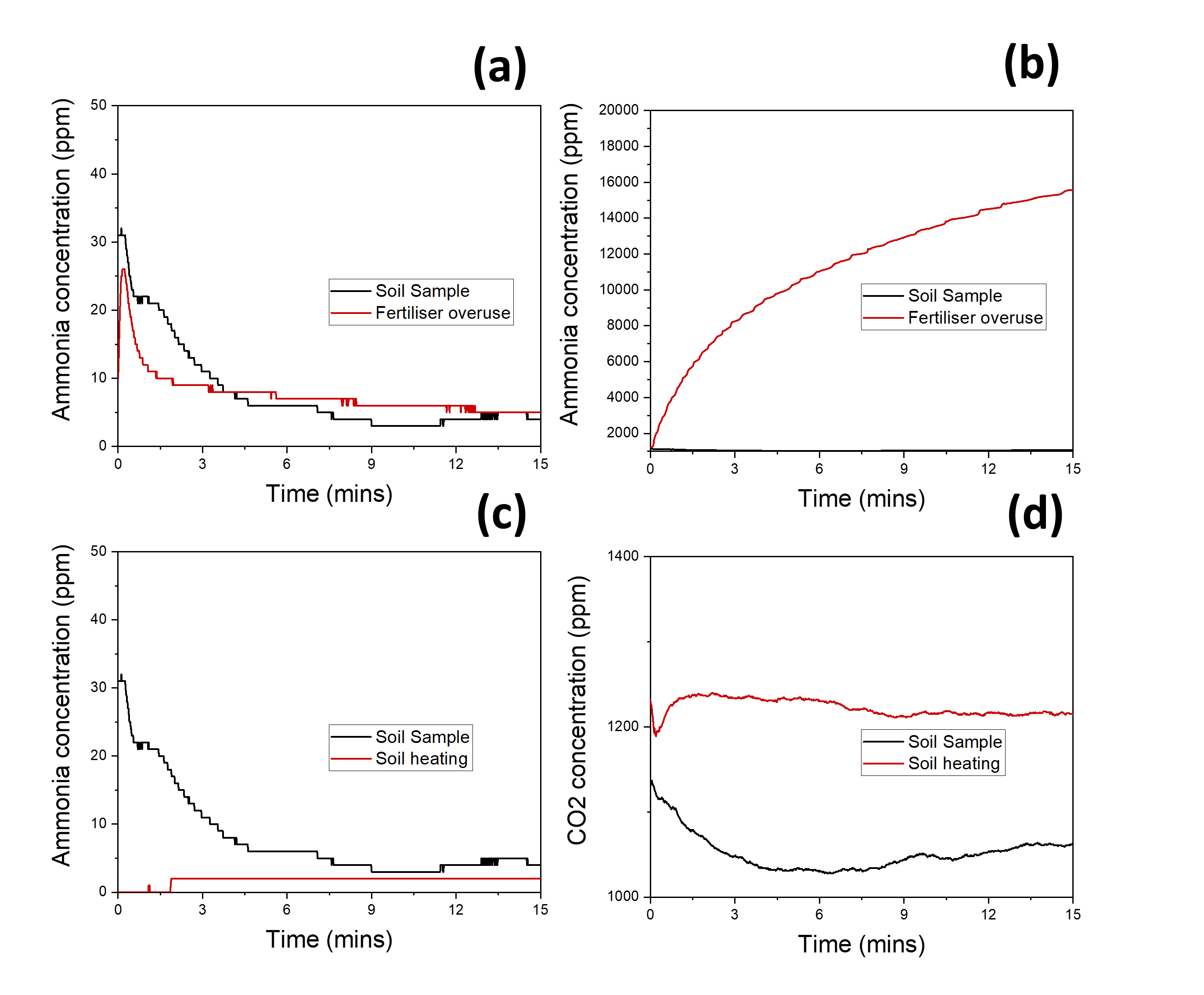 STEP 1
The operation of this gas chamber for the measurement of soil produced gases was simple and low-cost. To develop this system, a standard bottle , containing a lid that can be tightly sealed, can be used.
STEP 2
Holes can then be placed on the bottle lid, approximately of the size of the ammonia sensor, as shown on the first figure of this article.
STEP 3
After attachment of the sensors, the holes can be filled with a sealant, to avoid the escape of gases produced by the soil samples. In this case, I used a standard waterproof silicone sealant.
STEP 4
Finally, after the attachment of the sensors, the can be connected to an arduino device, for the measurement colelction. For the ammonia sensing device, the standard code described on the Wikipedia page of the device can be used (https://wiki.dfrobot.com/SKU_SEN0465toSEN0476_Gravity_Gas_Sensor_Calibrated_I2C_UART).
STEP 5
Use the code below extracted from the wikipedia page (https://wiki.dfrobot.com/SKU_SEN0465toSEN0476_Gravity_Gas_Sensor_Calibrated_I2C_UART), and upload it to the arduino to start the ammonia measurements.

In conclusion, the performance of an arduino-based system for the determination of soil health through the measurement of ammonia and CO2 concentrations in gas produced by soil has been demonstrated. Measurements were taken by assembling a low-cost gas chamber, where multiple sensing devices were incorporated.

Our results suggest that changes in CO2 concentrations were more sensitive to different soil inputs. However, the accurate measurement of this gas requires long incubation times, in the range of hours. On the contrary, ammonia measurements could provide fast information on soil health, including the effect of multiple components (i.e. sugars, fertiliser concentrations) on the nitrogen availability. The changes in this gas concentration were also more consistent with the nature of the input, increasing when nutrients were added, and decreasing in the case of fertiliser overuse or overheating. As such, the effectivity of this sensor was demonstrated, with the potential applications in agriculture and soil research among others. Moreover, the combination of ammonia gas measurements with the quantification of other gases (i.e. CO2, methane), could potentially be used for the early detection of soil diseases, which could trigger a rapid action to avoid production yields.

You can get a discount to buy these materials and try it yourself here!