The circuit consists of cascading high-voltage capacitors and diodes, so theoretically each subsequent cascade of two capacitors and two diodes should double the input voltage.
In one of my previous videos (https://www.youtube.com/watch?v=EFtNDtW804Q) you can see this type of multiplayer made with ten cascades where the output have a voltage of about 100 Kilovolts. To increase the output voltage, in this case I first tried to double the number of cascades but unfortunately the result was almost disappointing. Most likely due to losses I could get a maximum of 120 to 130 Kilovolts at the output. So, I connect the HV Transformer to drive two cascades of opposite polarities at the same time. The elements of the cascade are mounted on Plexiglas with a thickness of 3 mm, which is also an excellent insulating material. The capacitors are mounted on the front and the diodes on the back of the plexiglass. Now at the end of one cascade prevail negative ions(Kations) , and at the end of the other positive ions(Anions), so between these two differently charged electrodes a spark appears. With this setup I achieved a voltage between the two electrodes of over 180 Kilovolts. One kind of curiosity is that capacitors and diodes are in the air and not immersed in oil.

We can divide the whole device into several parts:
- DC voltage source consisting of mains transformer and rectifier, in this case with output voltage of 15V and current of 5A.
- AC high voltage source, with an output value of 5 to 10 thousand volts. This assembly consists of a driver circuit and a flyback transformer from an old TV. In my case it is a "Plasma Speaker" device I have made before. Also you can create a simpler driver for example with 555 IC, for which is also given the link to the schematic below.
-and two cascades, capacitors with value of 1nF/20kV, and HV diodes 20kV/20 mA
Stacking the two cascades provides an output of twice the voltage but with better ripple and capacitor charging characteristics than would be achieved with a single long cascade of the same voltage.
Approximately every millimeter of spark in the air corresponds to 1000 volts, which means a spark with a length of 20 centimeters means 200 thousands Volts voltage difference between the electrodes. 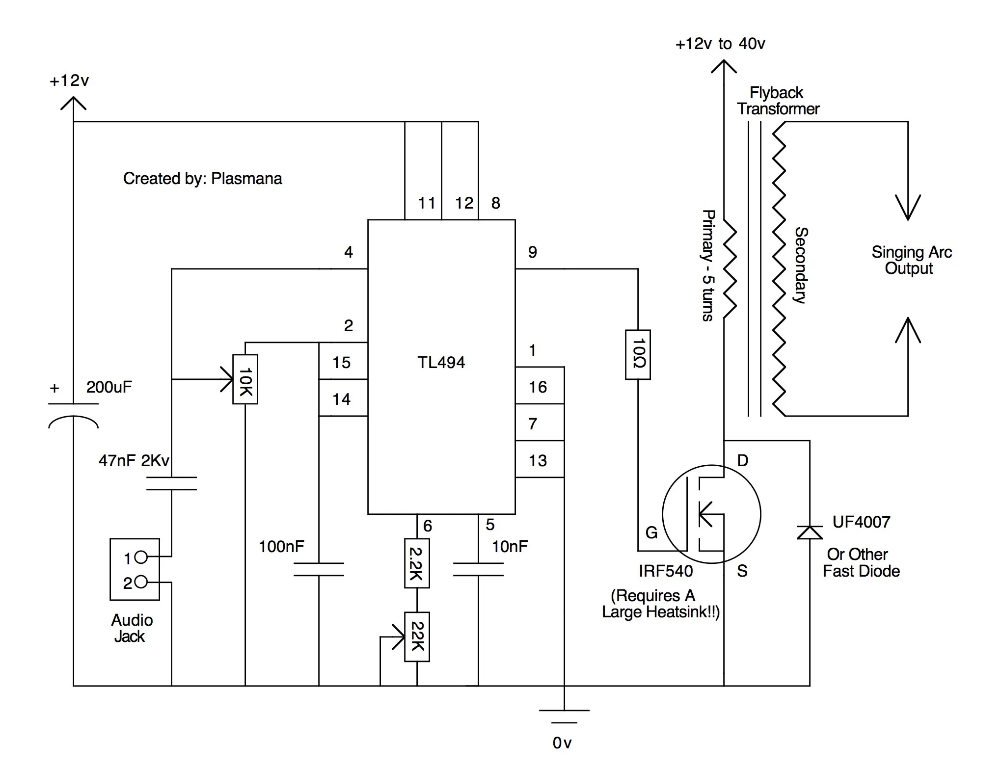 SAFETY NOTE: Please do not attempt to recreate the experiments shown on this video unless you are familiar with High Voltage Safety Techniques! Direct Current even above 60V maybe lethal, even when the AC supply voltage has been disconnected due to the stored energy in the capacitors.