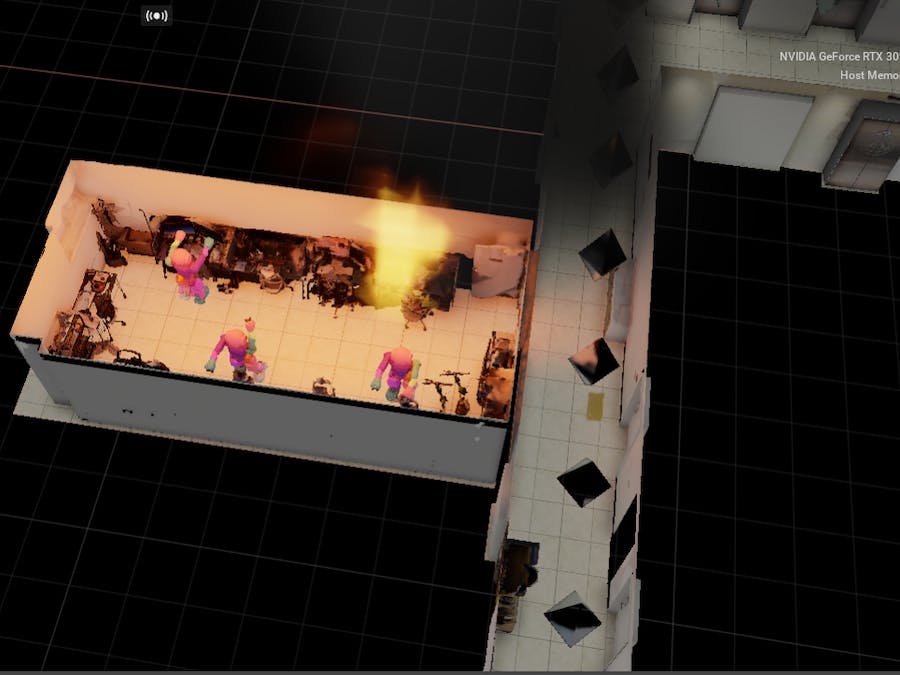 TEAM NAME: Blossom { Blossom is a word similar to the Korean pronunciation of "불났어! (A fire breaks out!)" }

Current problems in the event of a fire:

In the event of a fire in a building, fire authorities cannot actively deal with it until fire trucks and firefighters arrive.

The cause for the current situation is...

Unable to aggregate information from IoT devices to share the entire fire situation. The absence of a platform that directs IoT, robots, drones, etc.

Features provided by the service

Fire detection and real-time sharing of fire situations using IoT devices. .Using Mobius-based AIaaS to detect the number of lives and locate the robot Selection of evacuation sites based on fire conditions and calculation of optimal evacuation routes. Implement digital twin with Mobius and visualize with omniverse platform.

The scenario is the same as the image above. 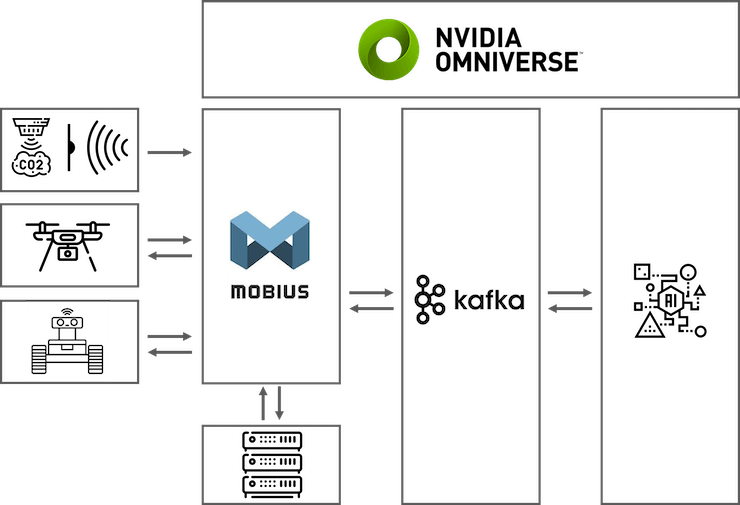 The system diagram is the same as the image above. 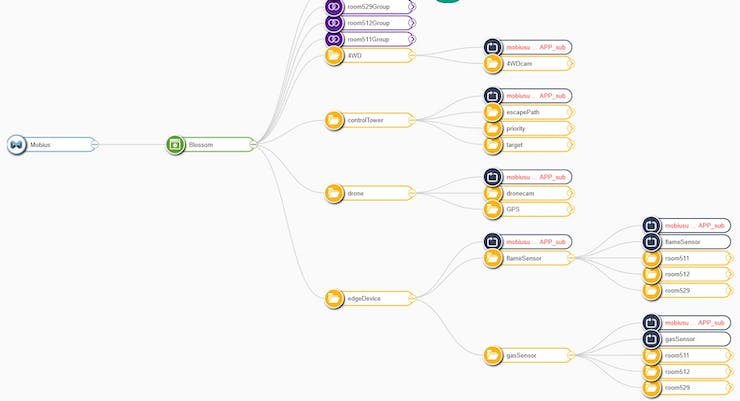 The following is about oneM2M resource structure design.

The oneM2M resource design was made by dividing it into a total of two.

First of all, the first structure has four containers under AE called Blossom.

4WD is a container related to a four-wheel drive robot and a container containing image data called 4WDcam was designed below.

There are two types of edgeDevice containers: flamesensor and gas sensor, and each container is divided into rooms

By room, the group function was used to obtain the last values of the flamesensor and the gas sensor at the same time. 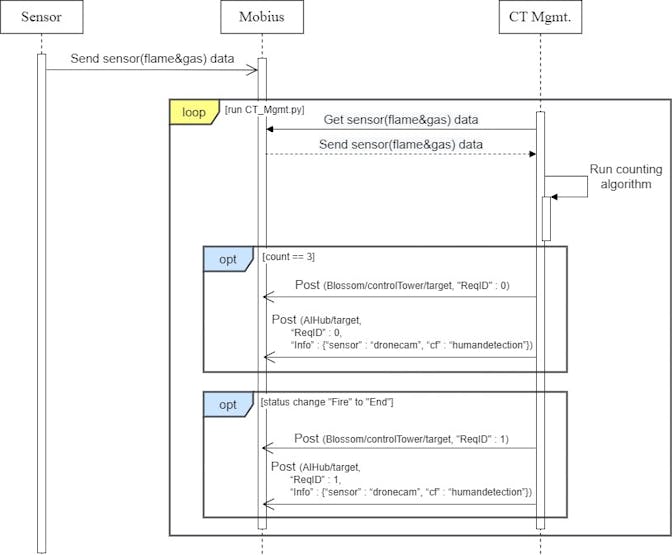 The flame and the gas sensor data are come from the oneM2M standard IoT platform. When the two sensor values are higher than the reference value, the counting algorithm starts.

If the count is lower than 3 due to the consecutive input of data that is lower than the reference value, ReqID and the request to stop the connection between the sensor and the cf is sent to the standard IoT platform. The Req_ID changes 1 and it meas the end of the fire. 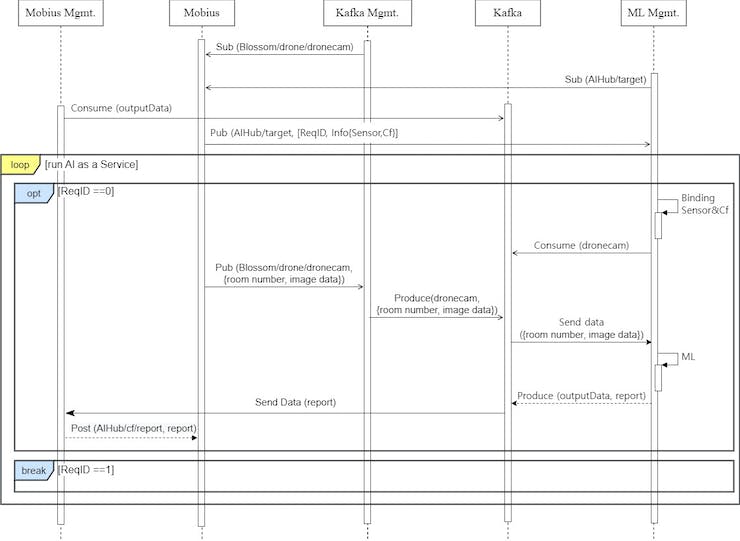 Sequence Diagram(AI as a service)

First, using the oneM2M standard IoT platform, AI as a service was developed by linking the IoT hub in charge of linking with the physical world and the AI Hub in charge of AI as a Service.

AI Hub has an AI service manager who oversees the management of AI services, and AI services allow AI service enablers existing inside the AI hub to register artificial intelligence models and link them to service APIs from outside through AI service brokers.

The following figure is an AI Hub resource structure linked to a standard IoT platform. Under the AE called AIHub, there are several models of containers and a user-requested container called target.

In the case of a target container, a request is received when using an AI service from the outside. If the request format is Req_ID = 0, it means requesting connection of the AI service, and a path to know the location of the desired AI model and test set is entered. When Req_ID = 1, it means that the AI service is requested to be deleted. 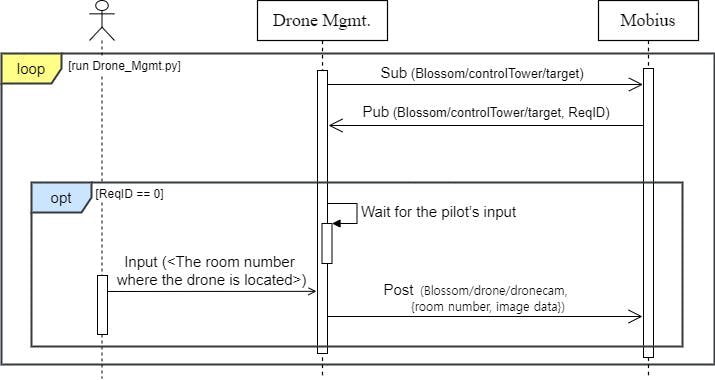 Sequence Diagram(The process of sending image data from a drone)

When a reqeust that a fire occurred on a standard IoT platform enters, drones among unmanned smart mobility vehicles move to a fire situation and take an indoor image of the fire site.

In addition, the control Tower automatically requests the connection between the camera sensor mounted on the drone and the AI Hub model.

Based on the inferenced result value, the number of person in need of rescue in the room is synchronized to the digital twin.

In the case of a fire, the control Tower automatically selects the camera sensor mounted on the drone and the model within the AI Hub to enter the target container within the standard IoT platform.

Since Req_ID = 0, it is a connection request, and the path with sensor data in the standard IoT platform is written, and the desired AI model is human detection. 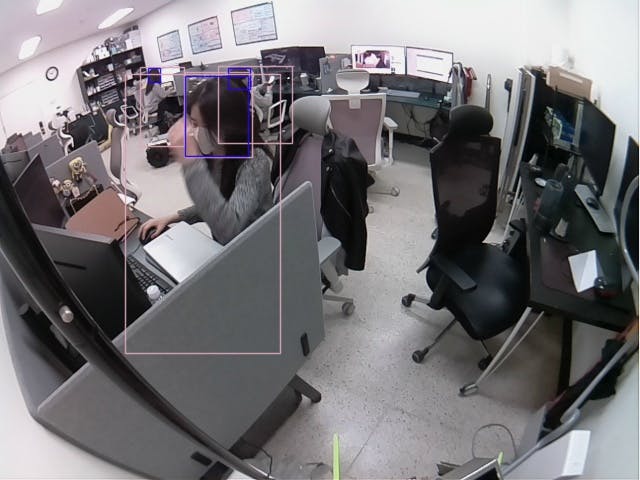 • An image of the results predicted by the Human Detection Model 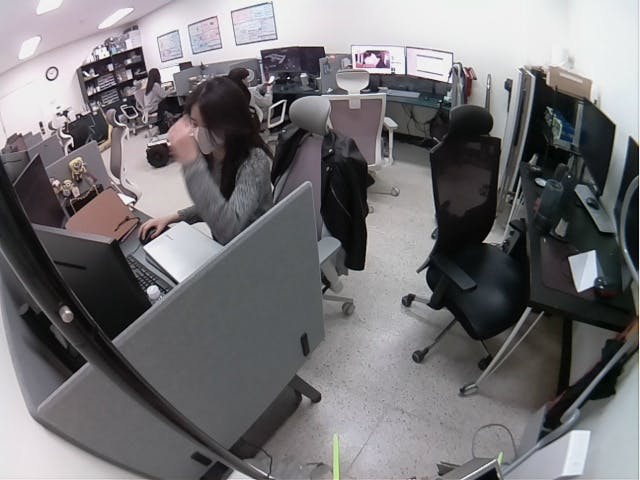 Based on the user's request, the IoT sensor and the AI model in the AI Hub are connected, and the result value is displayed in the human detection model container subreport container selected by the user after inference. The location of the room where the photograph was taken is 529 and it can be confirmed that there are three people

http and mqtt were used as the oneM2M protocol.

http used post and get, and mqtt used sub.

Post was used to upload data, and get was used to retrieve data periodically. In addition, the sub was used when receiving asynchronously.

The group function was created by http post, and when importing data generated by group, the http get(fopt) function has been used to receive data. 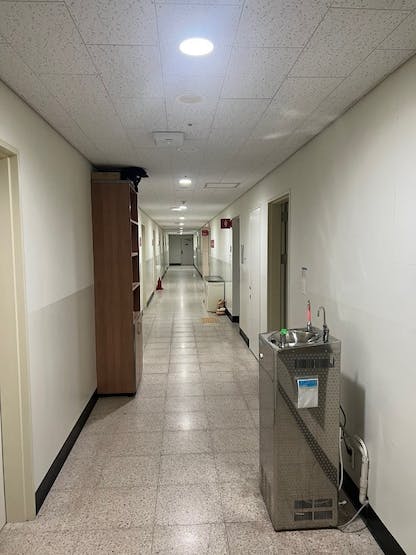 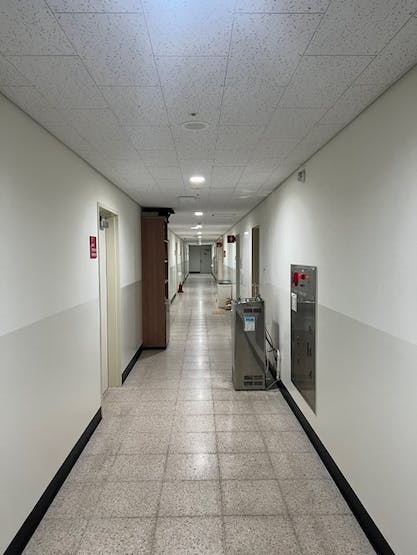 The indoor-based visual localization method used an image-based place recognition technique, and the inferencing model used a CNN based feature extract model with NetVLAD pooling layer that measure the similarity between images by aggregating local vectors of image pixel values into one global vector.

First, the interfering server has database photos captured for each node that is a certain distance away from the building, and the corresponding node information (information in the nearest room) is tagged (in this case, the information in the tagged closest room is used as a reference coordinate to perform localization in the tearal twin).

Our service is aimed at making it easier for firefighters to grasp fire conditions.It should be easy for firefighters to use, and it was designed to prevent confusion when used. So, I turned off the visual effect, made a key button, and visualized information about the place where the fire broke out and where it would be okay to evacuate before firefighters came.

The video above shows how we represent the optimal evacuation path.

Since the unmanned moving object will be used to identify human movements and conditions, it uses a true depth camera called ZED2 to obtain joint values from a human pose estimation API and transmit them to Mobius. This allows the digital twin to calculate the joint value and implement the movement as it is.

The video is a reflection of the movement

The article was first published in hackster, November 4, 2022