Interfacing Capacitive Fingerprint Sensor with an Arduino or ESP8266

Today we are going to add a protective layer to our projects. Don't worry we are not going to appoint any bodyguards for the same. It will be a cute little good looking fingerprint sensor from DFRobot.

So let's get to the fun part now.

Get PCBs for Your Projects Manufactured

Its manufacturing bases are equipped with the most advanced production equipment such as YAMAHA pick and place machine, Reflow oven, Wave soldering Machine, X-RAY, AOI testing machine; and the most professional technical personnel.

Though it’s only five years old, their factories have experience in the PCB industry for over 10 years in Chinese markets. It is a leading specialist in surface-mount, thru-hole, and mixed technology PCB assembly and electronic manufacturing services as well as turnkey PCB assembly.

PCBGOGO provides the order service from prototype to mass production, join them now.

About the Capacitive Fingerprint Sensor 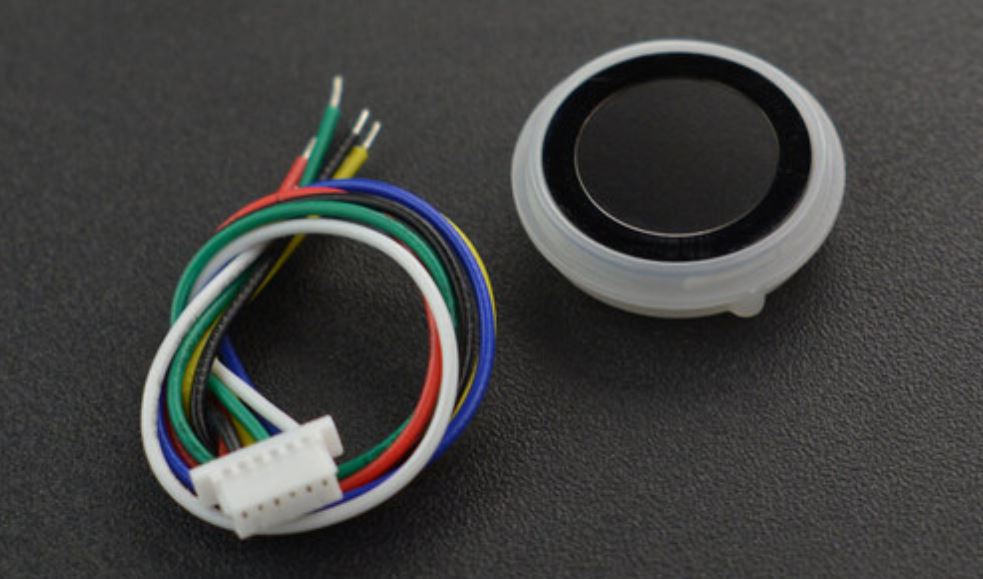 The Capacitive Fingerprint Sensor is a nice and compact one that is similar to the one at the back of your smartphone. It comes with round breathing LEDs and has a simple structure, small size, and delicate appearance. The sensor offers fast recognition speed and high security. It supports 360-degree arbitrary angle recognition and deep self-learning function, high performance, and low power consumption. Loaded with ID809 high-performance processor and semiconductor fingerprint sensor as the core, the sensor adopts a built-in IDfinger6.0 algorithm, which can complete all fingerprint identification work independently. This sensor supports UART communication and while working with the Arduino library, it can easily realize functions like fingerprint registration, fingerprint deletion, etc. It is a 6 pin device that can be easily connected to microcontrollers by virtue of the pitch connecter that comes with it. But one thing to keep in mind is that the color-coding of the wires that comes with this device is different from the normal coding. So we need to take care of it while doing the connections. The color coding is as given below:-

So here we are using two pins which see to be similar but have different functions these are the Vcc and Power supply pin. The function of the Vcc pin is that it acts as an enabling pin. When there is a power input at this pin then only the sensor will work otherwise not. On the Other hand, the Power Supply Pin is there to Power Up the device or turn it ON.

Technical Specifications and Applications of the Sensor 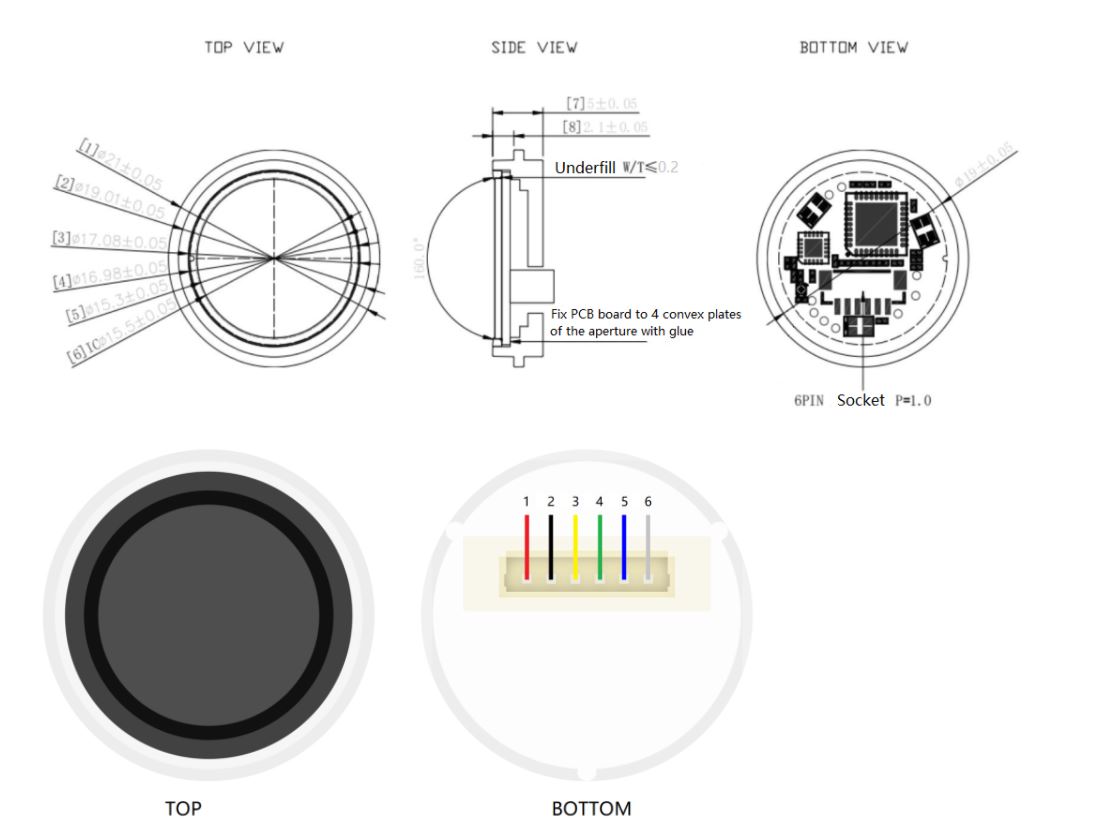 The Technical Specifications of this Sensor are as given below:-

Connecting the Sensor With Arduino UNO 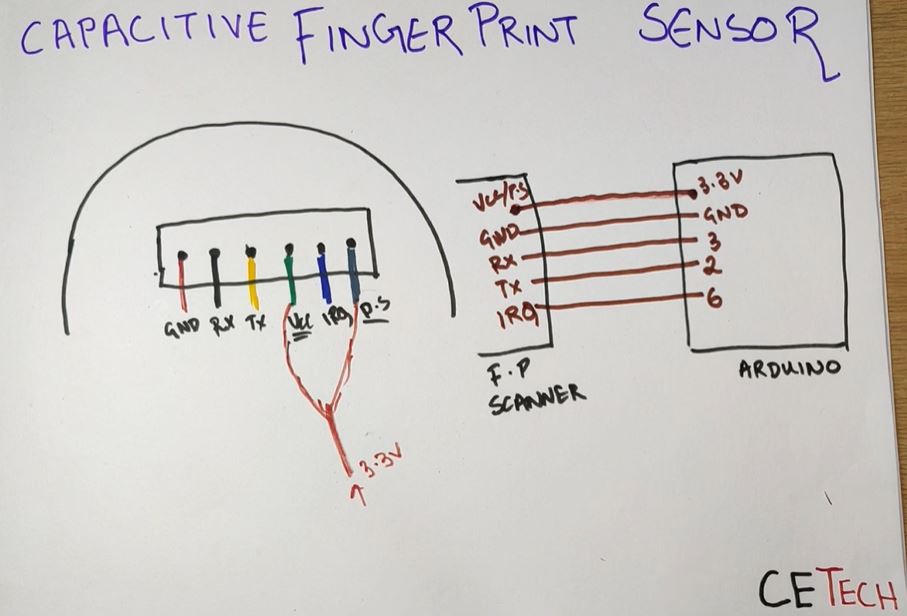 For performing the operations such as Fingerprint recording, Recognizing, and Deleting we first need to connect the Sensor to Arduino UNO by following the steps given below:-

Connect the Vcc and Power Supply Pin(Green and White Wire respectively) of the Fingerprint Scanner to the 3.3V pin of the Arduino UNO.

Connect the Ground Pin(Red Wire) of the Scanner to the GND pin of the Arduino.

Connect the Rx Pin(Black Wire) of the Scanner to the Digital Pin 3 of the Arduino.

Connect the Tx Pin(Yellow Wire) of the Scanner to the Digital Pin 2 of the Arduino.

And at last, Connect the IRQ Pin(Blue Wire) of the Scanner to the Digital Pin 6 of the Arduino. 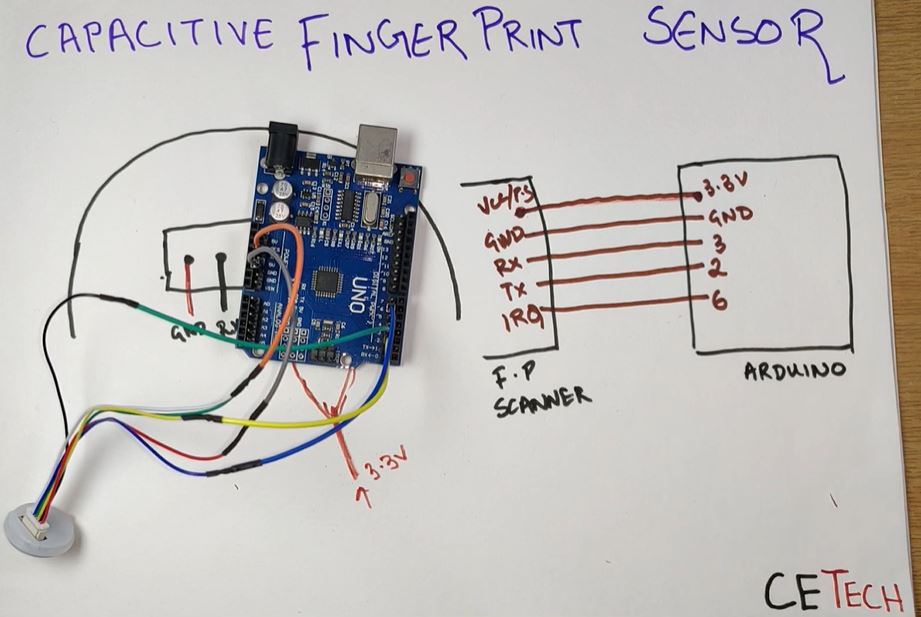 In this way, The Fingerprint Scanner is connected to the Arduino UNO and is ready to be coded. So now we need to connect the Arduino to our PC for the next step.

Coding the Arduino Board

Now in this step, we are going to upload the code to our Arduino UNO board. As soon as the code gets uploaded, The Scanner will be capable of storing a new fingerprint, recognizing the fingerprint, and also deleting the same. For this step, you need to refer to the Github repository of this project from here and after that follow the steps given below:- 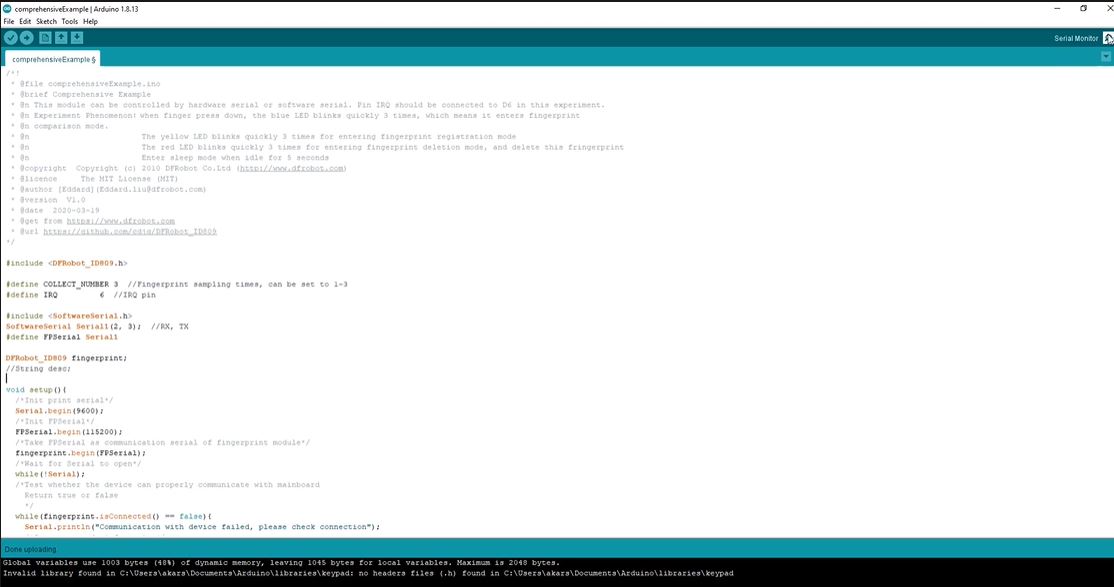 After that, you need to open the file named Arduino Code.ino. This is the code that needs to be uploaded to the Arduino. Paste this code in your Arduino IDE. Select the correct board, COM Port, and hit the upload button.And with these steps, Our Fingerprint Scanner is ready to use and we will test the functions of it in the next step.

Playing With the Scanner

The code that we just uploaded had three functions in it. Those functions are Reading and Testing the Fingerprint, Adding a new fingerprint, and Deleting any added Fingerprint. So now we will be testing these functions. For that, we first need to open the Serial Monitor which will display messages according to the task performed. We will hover around each of the operations one by one. 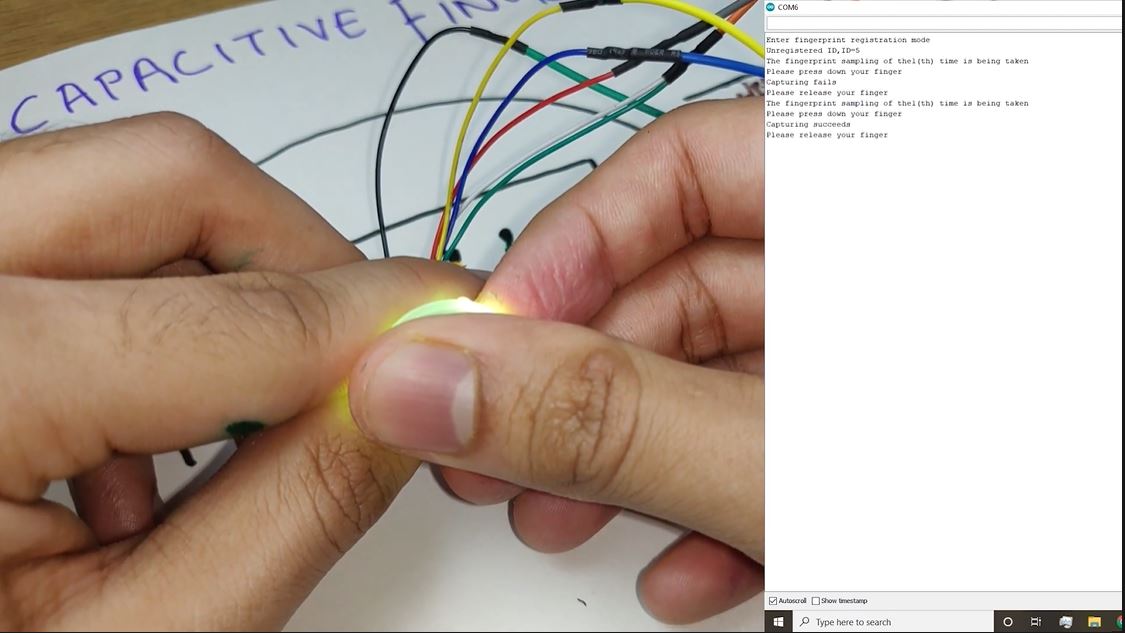 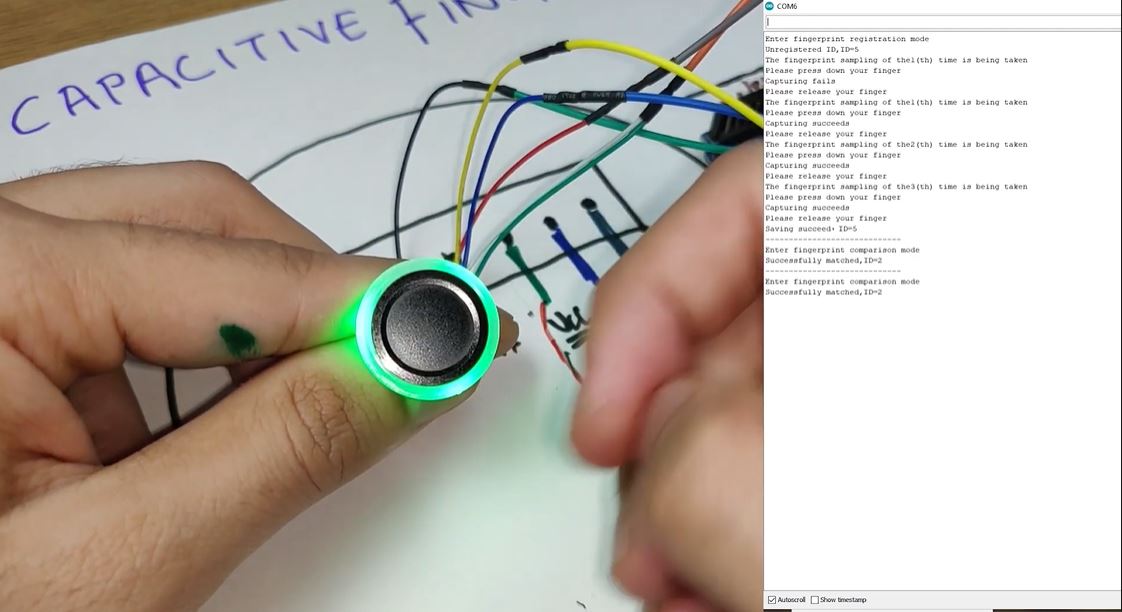 Testing a Fingerprint: Now we can test the added fingerprint by placing the thumb on the scanner again. This time we have to remove our finger after the blinking of the blue light and we will see that the green light turns on and a message on the Serial monitor will appear saying successfully matched with the ID of the fingerprint. 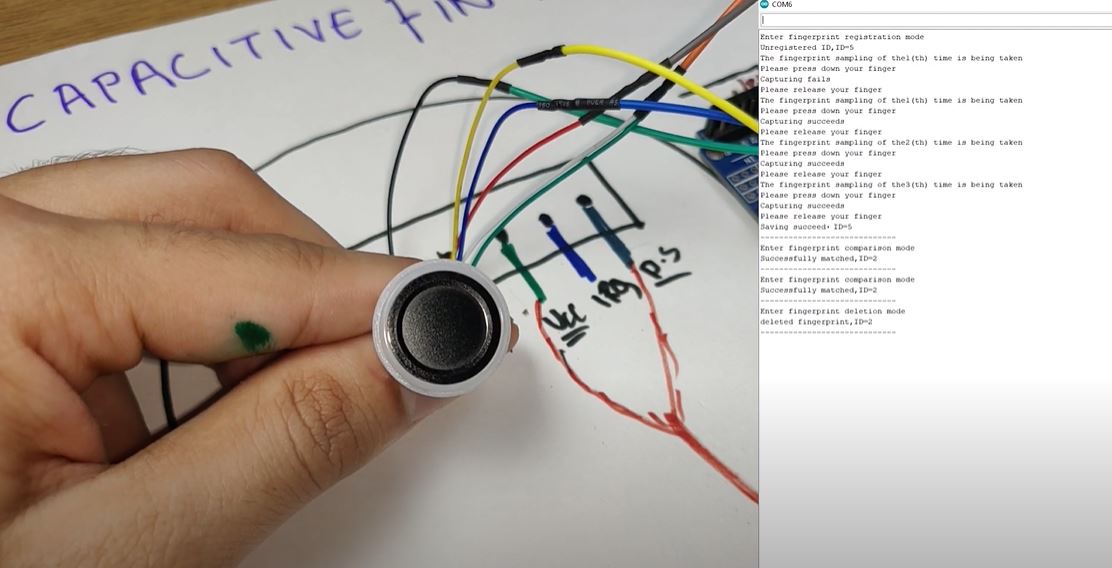 Another Way to Connect the Scanner 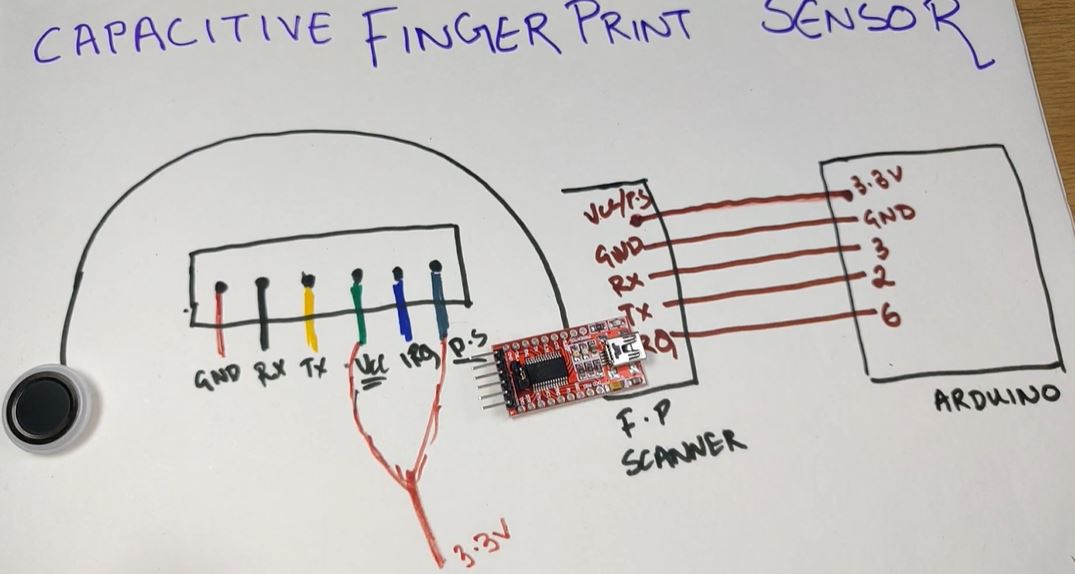 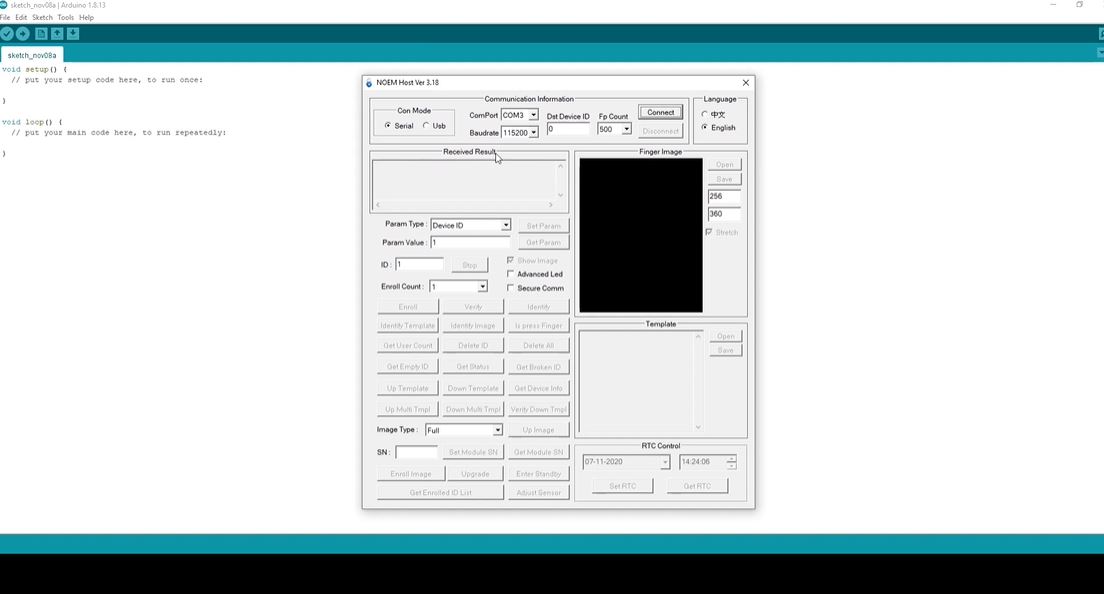 There you need to select the COM Port and Baud rate and you are ready to use the software. There are a lot of operations that can be performed using that software such as viewing the image of the fingerprint captured, Perform a check of the fingerprint, and many more.

So in this way, we have learned how to interface a Capacitive fingerprint Sensor to the Arduino and use it in our projects. Hope you liked the Tutorial. Looking forward to seeing you next time. Until then enjoy Electronics.