What is Helium? | How to mine earn HNT Helium? | Introduction to Helium Crypto Network Tutorial

Today we are going to have a closer look at The People Powered Network i.e. The Helium Network. The People Powered Network as the Helium Company mentions it, Is a LoraWAN based Network that provides coverage through the Gateways and Miners that people place at their houses or at their property that's why it is referred to as People Powered. In return, The company rewards the people in the form of cryptocurrency named HNT i.e. Helium Network Tokens. These tokens are credited to the people's account according to the service their hotspot provides to the network.

The Helium Network provides people like us a platform to connect our LoRa devices to the Application Servers by taking a very nominal fee and in this complete process, No Internet or any other cellular network is used. The complete Network works on LoRaWAN coverage that the hotspots placed by the people provide.

So far you should have felt that the Helium Network has the potential to be the next big thing in the technology world and there is a good earning prospect in this as well. So let's have a closer look at it.

Get PCBs for Your Projects Manufactured

You must check out JLCPCB for ordering PCBs online for cheap!

You get 10 good quality PCBs manufactured and shipped to your doorstep for 2$ and some shipping. You will also get a discount on shipping on your first order. To design your own PCB head over to easyEDA, once that is done upload your Gerber files onto JLCPCB to get them manufactured with good quality and quick turnaround time.

Launched in July 2019, Helium is a distributed network of long-range wireless hotspots. The goal is to create a blockchain-powered network for the Internet of Things (IoT) devices creating what they call “The People’s Powered Network”. Helium is a global, distributed network of Hotspots that creates public, long-range wireless coverage for LoRa-enabled IoT devices. If you want to learn about LoRa in detail, you can check our video about that from here

Hotspots produce and are compensated in HNT, the native cryptocurrency of the Helium blockchain. The Helium Blockchain is a new, open-source, public blockchain created entirely to incentivize the creation of physical, decentralized wireless networks. Today, the Helium blockchain, and its tens of thousands of Hotspots, provide access to the largest LoRaWAN network in the world.

The Helium Network is a physical wireless network that succeeds based on the amount of reliable coverage it can create for users deploying connected devices on it. As such, it required a working algorithm that was built for this case. Proof-of-Coverage takes advantage of the unique, undeniable properties of radio frequency (RF) to produce proofs that are meaningful to the Helium Network and its participants. Specifically, PoC relies on the following characteristics:

RF travels at the speed of light with (effectively) no latency.

The blockchain is constantly interrogating Hotspots using a mechanism known as a “PoC Challenge” using these properties. The ultimate power of Proof-of-Coverage lies in the fact that the data generated by the ongoing proofs and stored in the Helium blockchain is definitive verification of the wireless coverage provided by Hotspots on the Network.

The Helium Network is created by hotspots. A Hotspot is a LoRaWAN gateway associated with a miner. A miner is a lightweight device that can run on a Raspberry Pi and can be deployed simply at home. A miner is a LoRaWAN based device that provides coverage to the LoRa nodes in their range. The miners support the device by connecting them to the Application Server and in return to that, the network rewards the miner with Helium's native cryptocurrency i.e. Helium Network Tokens also known as HNT. These HNT's goes into the wallet of the miner's owner and can be redeemed in the form of money.

The procedure for deciding the amount is noted in HIP i.e. Helium Improvement Protocol which you can access from over here. There are a total of 30 versions of this, Out of which, Version number 17 is solely dedicated to the Incentivization and related process. The miners connect altogether over a P2P Network i.e. a Peer to Peer Network in which a number of computers are connected to each other and have an equal amount of responsibility in maintaining the Network. They collectively maintain and run a Blockchain. Device Communication passes through all the layers and is routed up to their specific Network Server. The distributed network supports multiple Network Servers which are the centralized components in the architecture. After all these layers, The last layer is the Application Layer Server which is the final destination of all the nodes. All the nodes are intended to connect to these Application Servers in which the Helium Network supports them. 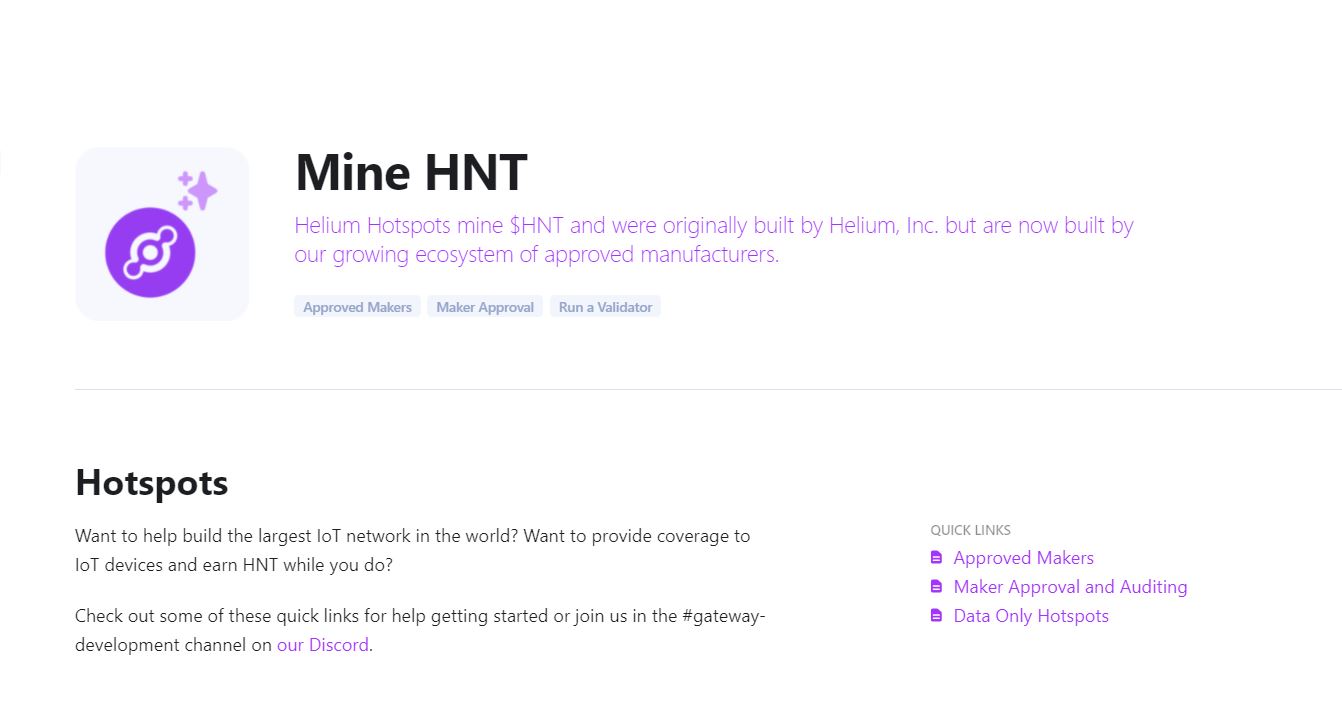 The Helium Hotspot enables anyone to own and operate a wireless network for low-power Internet of Things (IoT) devices. The Helium Hotspot provides hundreds of square miles of connectivity and can transmit data at a fraction of the cost of a cellular network. Helium uses an open-source LongFi architecture, which combines the LoRaWAN wireless protocol and the Helium blockchain. Hotspots also act as miners on the Helium blockchain so owners can earn a new cryptocurrency (HNT), for building the network and transferring IoT device data. There are three major types of Hotspots which are mentioned below:-

Full Hotspots: Full Hotspots are Helium coverage providers that can participate in all potential reward activity available to Hotspots. Compared to Data Only Hotspots, Full Hotspots are eligible for Proof-of-Coverage Rewards. Full Hotspots may only be manufactured by approved Makers. These are hardware vendors that have been approved by the Helium community and the DeWi. This process is governed via Helium Improvement Proposal 19 (HIP19).

Light Hotspots: Light Hotspots are the evolution of how LoRaWAN gateways will interact with the Helium blockchain. Since the genesis block, the Helium blockchain has run entirely on the physical Hotspot itself. As the blockchain network grows, each Hotspot running a full node undergoes increasing load and is starting to fall out of sync due to the higher compute requirements. To mitigate this, the Hotspot's consensus work will be moved off of physical Hotspots and onto Validators. This will simplify the architecture and enable us to grow the Network exponentially while keeping block times and epochs stable. We have also published an article on how to make your own Light Hotspot at home. You can check that out from here and also check the video tutorial from here. 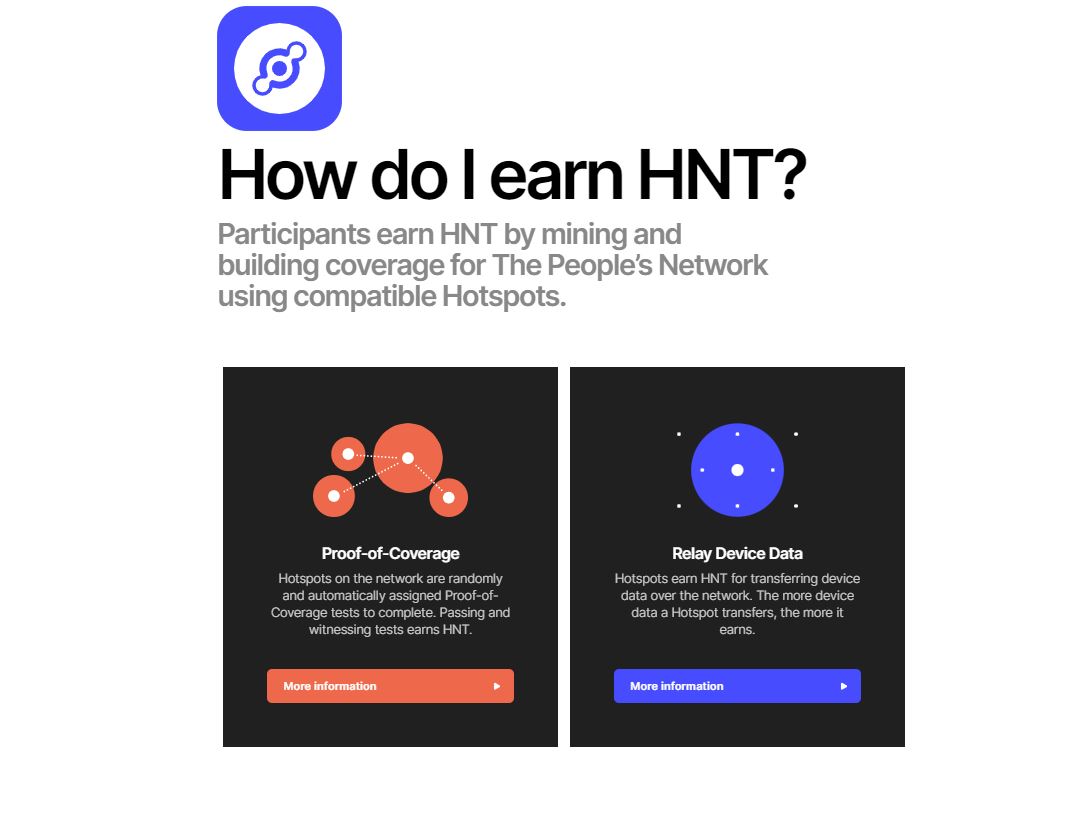 Helium uses a new work algorithm called Proof of Coverage (PoC), and rewards miners in HNT — Helium coin like ETH is to Ethereum — for using radio waves to validate the hotspots that are actually providing wireless coverage to devices. Much like Ethereum uses graphics cards to crunch cryptographic hash codes that provide the proof of work needed to validate transactions, Helium miners verify that wireless hotspots aren’t lying about their service by using radio waves to “interrogate” hotspots about their activity.

Proof of Coverage only works because of several key properties of radio-frequency (RF) that allow miners to produce proofs that meaningfully prove the legitimacy of hotspot activity:

RF travels at the speed of light, which means it has effectively zero latency.

RF can only travel a limited physical distance.

The strength of an RF signal can be used to determine how far away it originated. 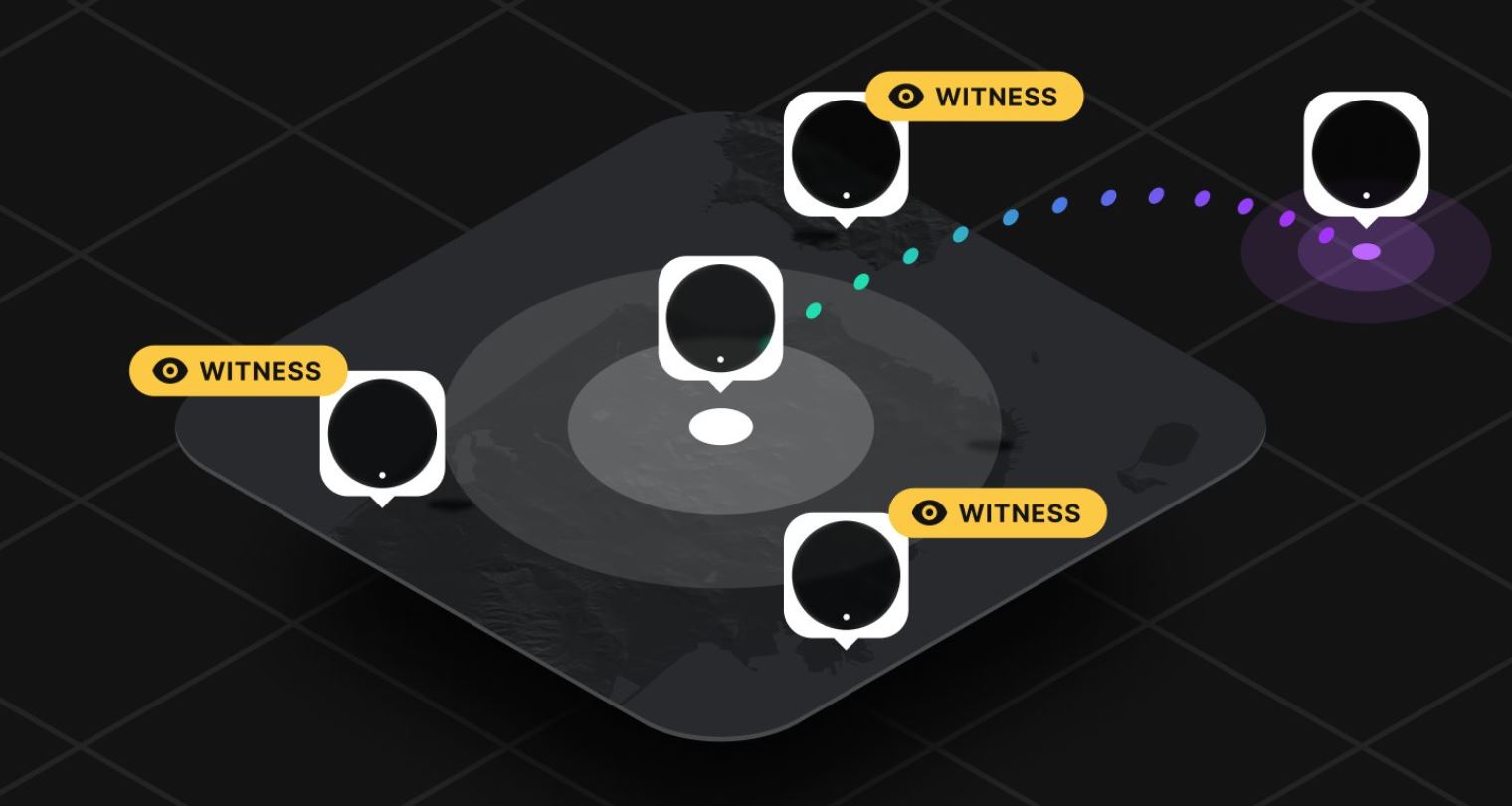 These three characteristics are fundamental to Proof of Coverage functioning since they allow the blockchain to constantly check if hotspots are working properly via a “Challenge”. A challenge is the actual unit of work that must be completed to satisfy the PoC protocol. Challenges involve three roles: challenger, transmitter, and witness. Each role serves a specific function to verify the data transmitted by a hotspot.

Challenger: The challenger is the hotspot that created the challenge. This happens every ~200 blocks.

Transmitter: The transmitter is the hotspot being challenged. It is responsible for sending (“beaconing”) the packets of data that pertain to the challenge.

At any time one of your hotspots could be performing any one of these roles, and each one is rewarded HNT by the network. So setting up a Helium miner in a window of an area that has existing Helium network activity will start to earn more HNT than an area that has no coverage. I will link more in-depth documentation on the inner workings of the Helium network in the Resources section; for now, let’s dive into determining your potential mining profits. 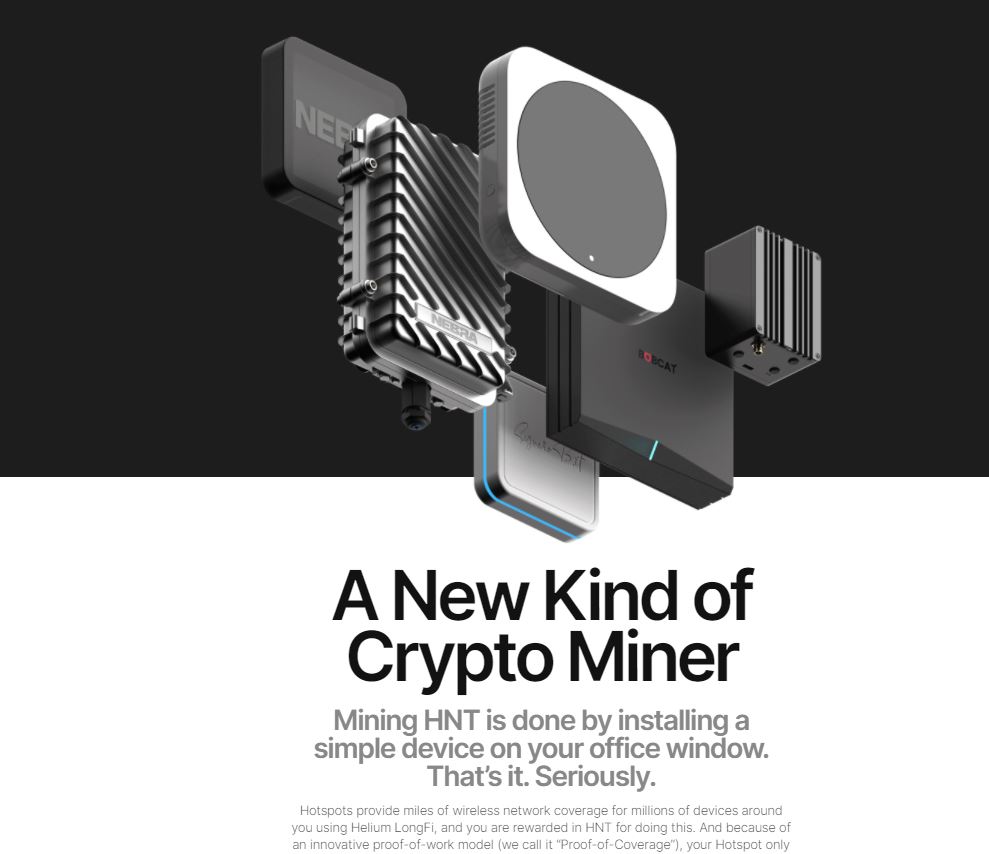 Mine: The Helium Network is powered by an entirely new Incentive model which is made possible by the Helium Blockchain. The Helium blockchain rewards Hotspots for providing wireless coverage and verifying the Helium Network. Hotspots are rewarded in Helium Token, $HNT. In each block, Hotspots perform various types of work and are awarded according to the distribution. Once your Hotspot is completely deployed and fully synced with the Helium blockchain, you as the owner are not required to do anything else in order to earn $HNT. Your Hotspot will perform all of the above activities on its own while it runs. We have discussed in detail about a Miner here and also have a video tutorial which you can check out from here.

Stake: The stake is a non-reversible transaction recorded on the blockchain and not held by either Helium, Inc. or the Decentralized Wireless Alliance. Validator nodes are a new entity on the Helium Blockchain that performs consensus group work, including verifying transactions and adding new blocks to the blockchain. To run a validator requires a stake (deposit) of 10,000 HNT and running validator node software in a suitable environment. In return for staking, users contribute to network scalability and earn HNT rewards. Validators must be kept online and up to date to earn rewards. If a validator is offline or isn’t up to date it will be penalized and earn fewer rewards. To withdraw the staked amount an owner needs to unstake a validator. Once unstaked, validators enter a cooldown period for approximately 5 months (250,000 blocks) and do NOT earn rewards. After this cooldown period, the staked amount is returned to the owner’s wallet.

Using the Network: From asset tracking to smart leak detection chooses any LoRaWAN-compatible sensor. Onboard and manage devices with Console using the hosted or open-source version. Analyze the data in your favorite IoT platform with Console pre-built or custom integrations. The Helium Console is a web-based device management tool that allows developers to register, authenticate, and manage their devices on the Helium network. The Helium Network is unique in that it provides public wireless infrastructure for privately operated LoRaWAN Network Servers and interestingly all of this costs a very small amount of money. That's why Helium Network is a great choice for IoT and LoRa related projects.

So this was an insight about what Helium Network is how it works and how it can be useful to us. Now as you have got to know about this Network, you can try this out as well and earn yourself some Helium Network Tokens.