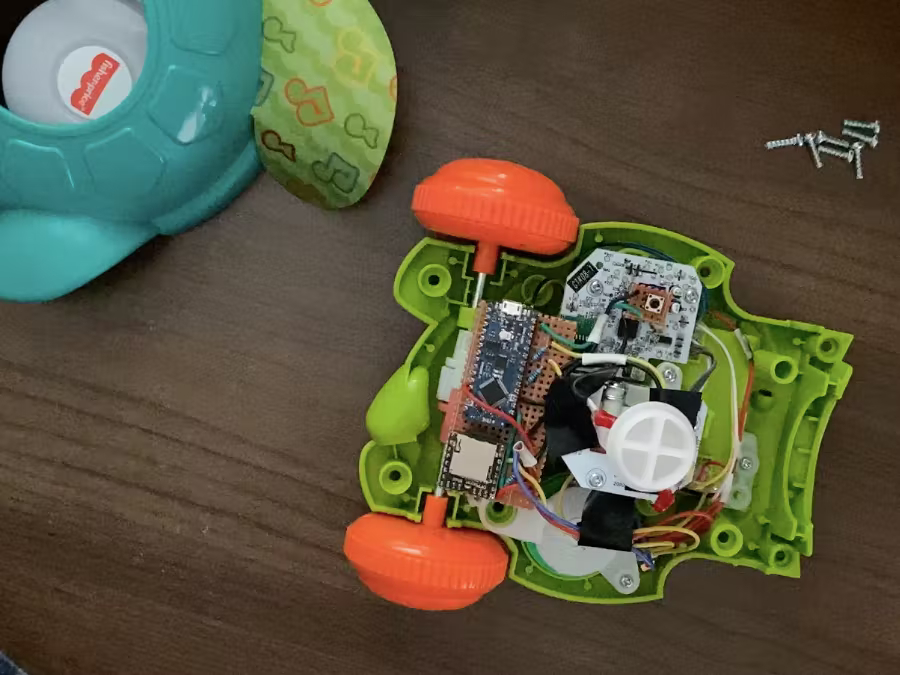 This project started shortly after I learned about Arduino. My daughter was playing with one of her toys, the Fisher Price Sit-to-Crawl Sea Turtle, and I decided to take a look under the hood. 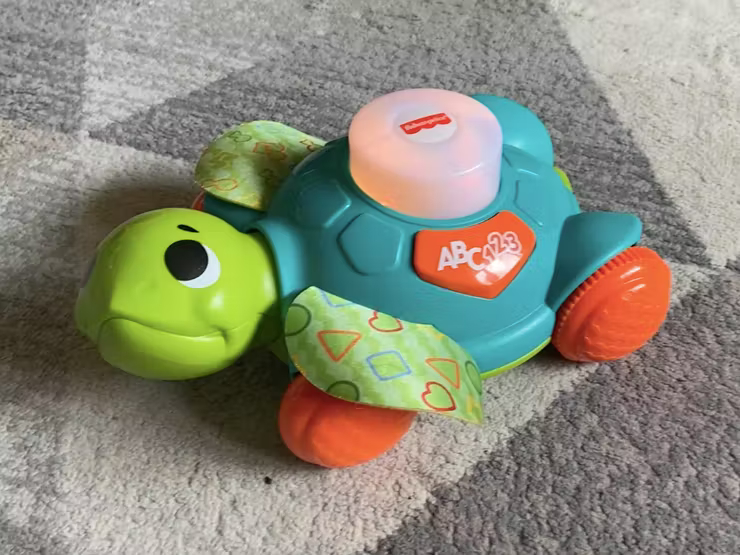 When I disassembled the toy, I learned that it essentially consists of a couple switches, a microchip, and a speaker. Since I had recently bought an Arduino starter kit, I wondered if I could mod the toy to play custom audio files. After a month of learning and tinkering, I created this:

This mod works by adding a custom circuit board to the toy and connecting that board to both the toy's speaker and 4.5v source (3 AA batteries).

Here's the schematic of the circuit board that was added to the toy: 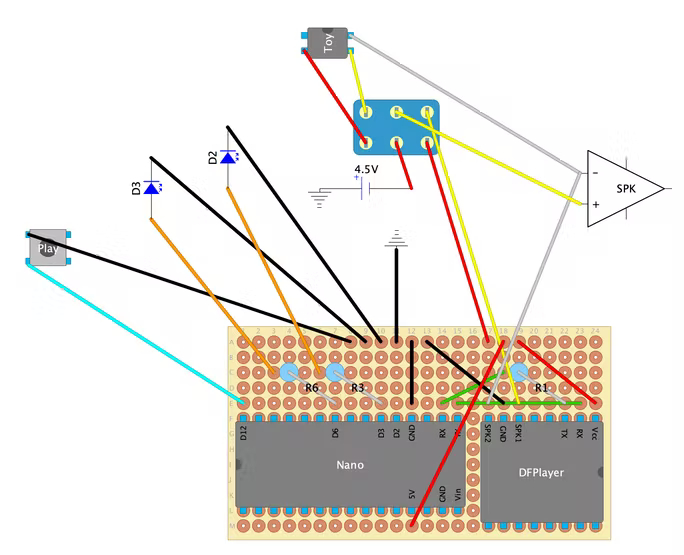 And here's an internal diagram of modded toy: 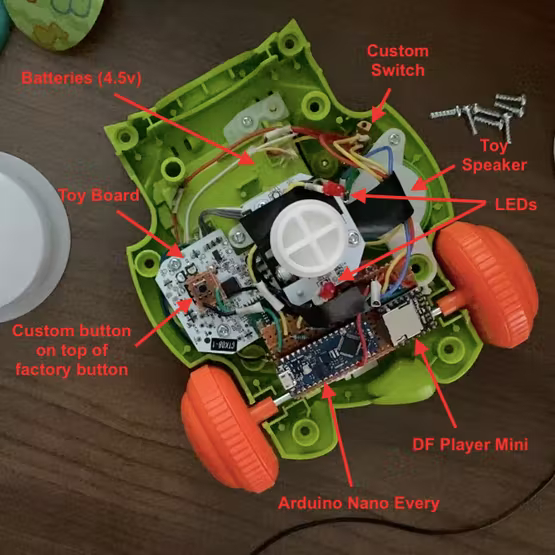 Playing custom audio with an Arduino

Creating an mp3 player is much harder than I imagined. Luckily, a little mp3 player module exists - the DFPlayer Mini. It's pretty easy to connect the DFPlayer to an Arduino, load some tracks on it, and play those tracks through a speaker.

That said, the DFPlayer is a quirky module. I had issues writing code for the module and with noise on playback. I was able to solve all my code issues and most of the noise issues by searching around and finding threads online from people that had similar problems.

I also added a custom button to the toy that will play the next audio file loaded on the DFPlayer. I positioned the button in the toy so that the a press of the toy's orange panel would trigger it.

Switching between factory and custom modes

One of the most important features I wanted to build into this mod was to be able to switch back and forth between the factory audio and my custom audio. There wasn't enough room in they toy for a second speaker or voltage source, so I needed to connect my custom board to the toy's batteries and speaker.

To separate the circuits and prevent them from being turned on at the same time, I added a slide switch to the toy. The slide switch is double pole/double throw and switches which board is connected to the batteries and speaker.

The original toy blinks RGB LEDs to the beat of the music while each audio track plays. I didn't get that fancy with my custom LEDs. Instead, I installed red LEDs that blinked on and off while the custom audio tracks played.

Using an Arduino Nano Every helped as it is one of the smaller and fully featured chips available. It also helped that the DFPlayer Mini is so small. I positioned the chips on my perfboard to minimize space and with some dremeling of the toy's shell, I was able to fit them inside the toy. To secure the perfboard, I used adhesive velcro.

I had to do some additional dremeling to a hole in the bottom of the toy so I could access the custom slide switch.

There is some audio noise, or stuttering, when playing certain custom tracks through the toys speaker. I'm not sure what is is about certain tracks that trigger the stuttering noise, but my assumption is that the problem is related to variable or inadequate current being supplied to the DFPlayer Mini. This assumption is based on the observation that the noise was considerably worse when using a 9v battery, which outputs much less current than 3 AA batteries. I wonder if adding capacitors of the proper value and configuration could eliminate the noise issue, but that's above my head and not really worth as the audio doesn't sound terrible.

This was a fun project and served as a perfect introduction to both the Arduino and DIY electronics. I can't tell you how much I learned and how much problem solving I had to do. I didn't even know how to solder when I started this project. Thankfully, I had a lot of help from countless others who had similar problems and took the time to document them online. I also posted some questions directly to /r/Arduino on Reddit, which was very helpful.

If you want see a deeper dive into how I made this project work, watch the video below. 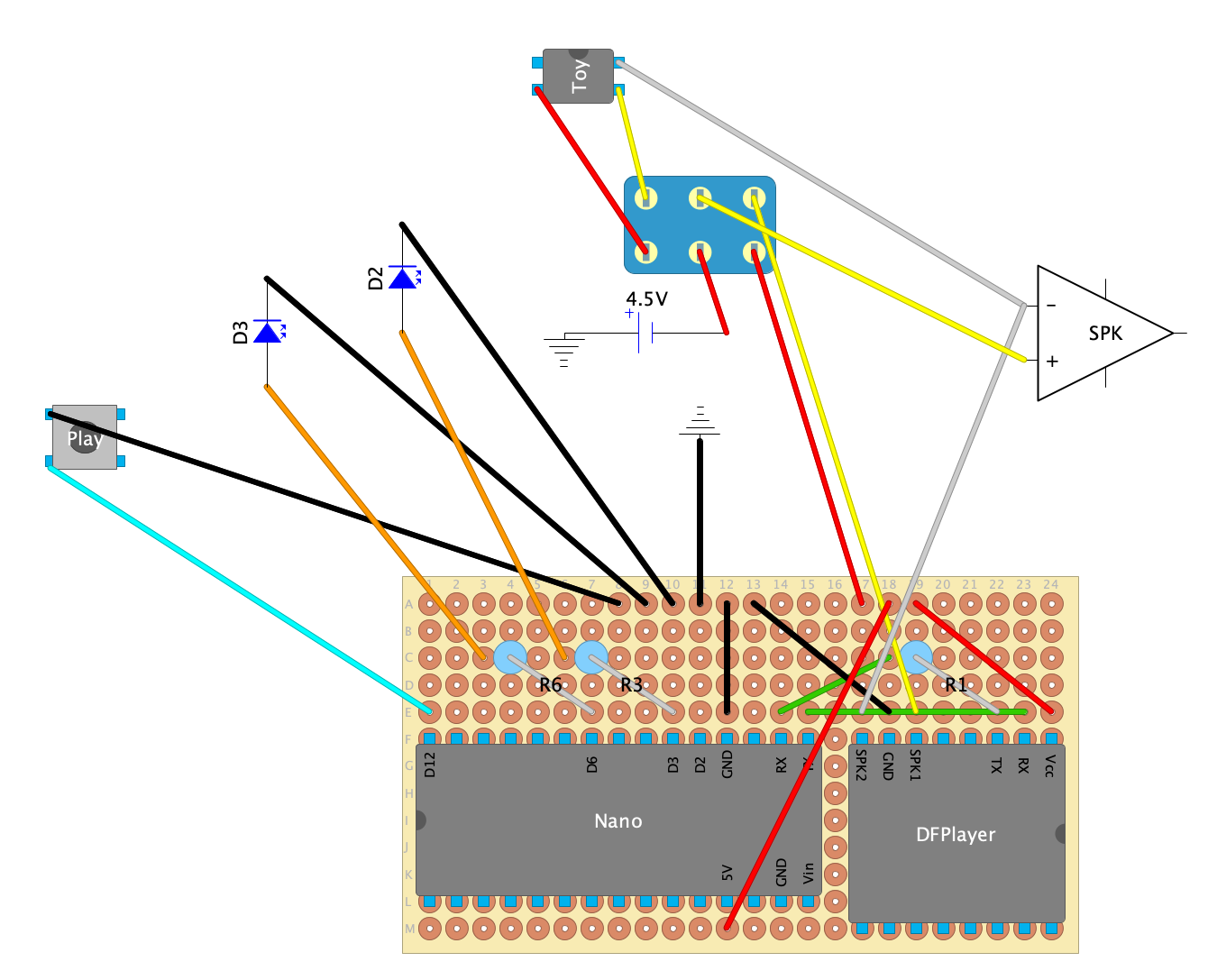 The article was first published in hackster, April 12, 2022