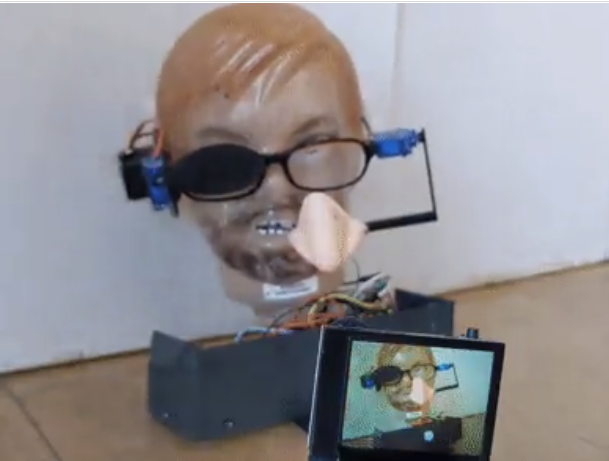 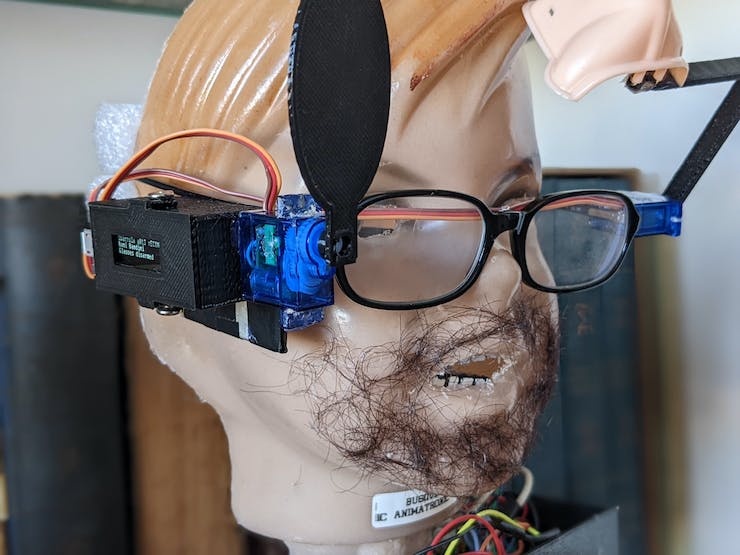 “A man sets himself the task of depicting the world. Year after year, he fills a space with images of provinces, kingdoms, mountains, bays, ships, islands, fishes, rooms, instruments, stars, horses, and people. Just before he dies, he discovers that out of this patient labyrinth of lines emerge the features of his own face.”

This fragment by Jorge Luis Borges was kind of prophetic. AI Face Recognition easily links features of a face with the owner’s world, including his crimes. What could go wrong? A few years ago, a man named Guillermo Federico Ibarrola was arrested in Buenos Aires by the Police after being pointed by a Russian made software from NTechLab as the author of an aggravated robbery. After 5 days of terror and just before going to jail, someone found the error: different second name. 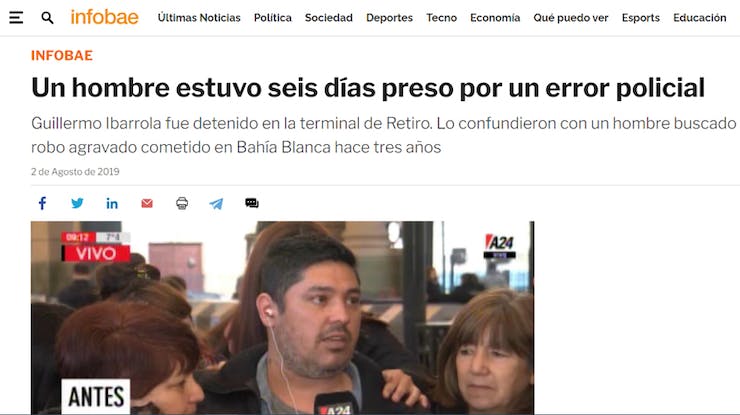 How can face recognition software be fooled?

There are several projects about this. From Tshirts with patterns to jewelry and IR lights. I will try to contribute with these simple servo based glasses with automated cam detection. 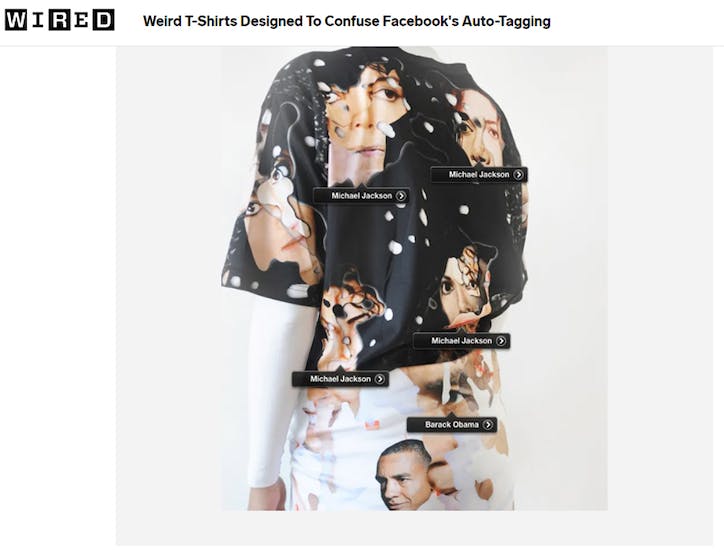 How does Face Recognition works?

“Facial recognition is a challenging pattern recognition problem in computing. Facial recognition systems attempt to identify a human face, which is three-dimensional and changes in appearance with lighting and facial expression, based on its two-dimensional image. To accomplish this computational task, facial recognition systems perform four steps. First face detection is used to segment the face from the image background. In the second step the segmented face image is aligned to account for face pose, image size and photographic properties, such as illumination and grayscale. The purpose of the alignment process is to enable the accurate localization of facial features in the third step, the facial feature extraction. Features such as eyes, nose and mouth are pinpointed and measured in the image to represent the face. The so established feature vector of the face is then, in the fourth step, matched against a database of faces.” (Wikipedia)

So, hiding or changing the position of the eyes, nose and mouth could work, right? 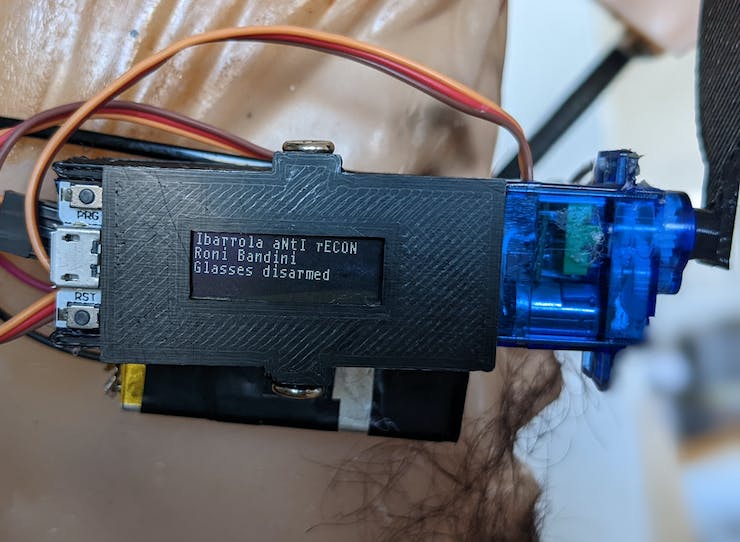 Let’s tryto disguise face features with some cheap servos mounted over old glasses. They will be controlled by an ESP board since I will also add anautomatic mode scanning WiFi SSID. Example: if you know that facial recognition cams are located in bus terminals, you can configure the device to trigger the servos, when specific WIFI routers found in the bus terminal are found.

Note: with en easy modification, VK16 GPS module can be used but consider that GPS signal is weak inside buildings. 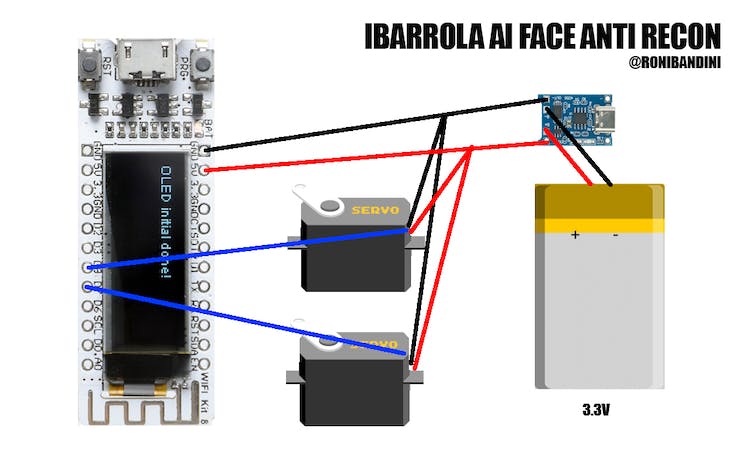 There are 4 3d parts to print. 2 of them from the ESP8266 box. Then you have the left arm and right arm. Nose should be attached to the big arm.

Edit settings, like name of the cam SSID to be recognized and upload with Arduino IDE. 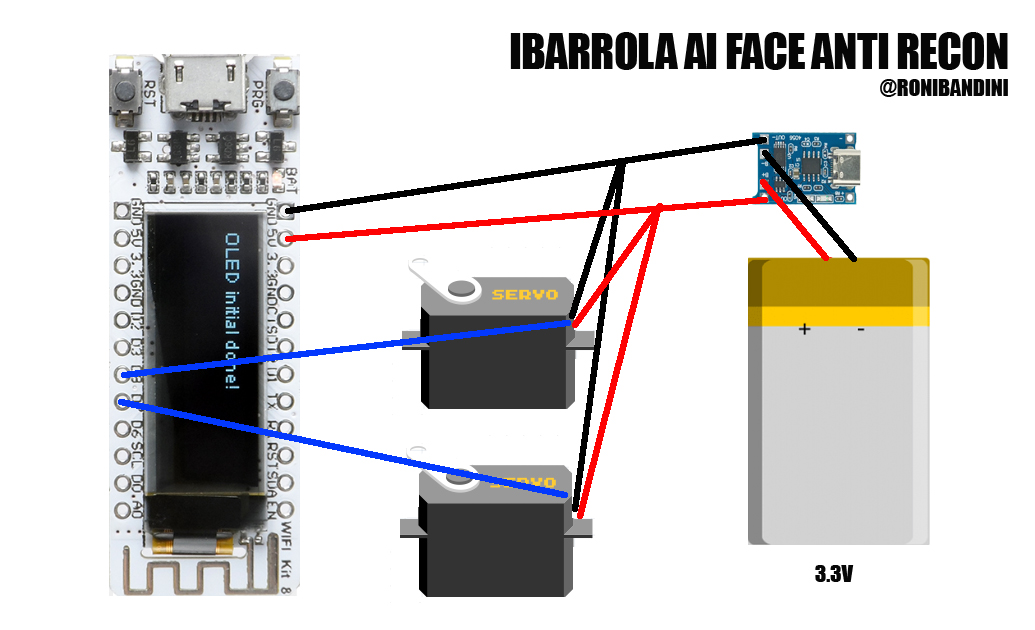 The article was first published in hackster, June 13, 2022